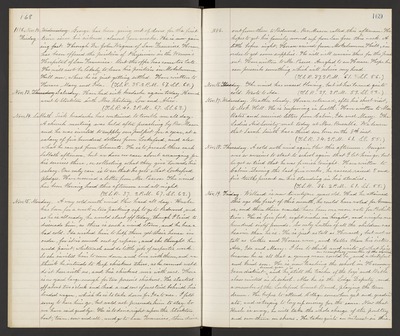 1886. Nov. 12. Friday. George has been going out of doors for the first time since his sickness - almost four weeks. He is now gaining fast. Through Dr. John Wagner of San Francisco, Horace has been offered the position of Physician in the Women's Hospital of San Francisco. But the offer has come too late. He will not be likely to leave his position on Mokelumme Hill now, where he is just getting settled. Have written to Horace, Mary and Ida. (T.S.R. 35. 2 P.M. 67. S.S. 60.)

Nov. 14. Sabbath. Sick headache has continued to trouble me all day. A church meeting was held after preaching by Rev. Mason and he was invited to supply our pulpit for a year, at a salary of five hundred dollars from Lockeford, and also what he can get from Clements. He is to preach these each Sabbath afternoon, but we have our case about arranging for his services there, or collecting what they give towards his salary. Our only care is to see that he gets what Lockeford pledges. Have received a letter from Mr. Pascoe. The wind has been blowing hard this afternoon and all night. (T.S.R. 37. 2 P.M. 67. S.S. 62.)

Nov. 15. Monday. A very cold north wind blew hard all day. Uncle has been for a week or two packing up to go to Redwood, and as he is all ready, he would start off today, though I tried to dissuade him, as there is such a wind storm, and he has a bad cold, Ida wished him to help them get their house in order, for it is much out of repair, and she thought he could paint, whitewash and do little jobs of carpenter work. So she invited him to come down and live with them, and we think he intends to keep chickens there, as he cannot well do it here with us, and his chickens mix with ours. There is no yard large enough for two person's chickens. He started off about two o'clock and had a red cow of ours tied behind his loaded wagon, which he is to take down for Ida to use, I felt sorry to have him go, but could not persuade him to stay. So we have said goodbye. He is to drive right upon the Stockton boat, team, cow and all, and go to San Francisco, then drive

1886. out from there to Redwood. Rev. Mason called this afternoon. He hopes to get his family moved up from San Jose this week. A little before night, Horace arrived from Mokelumme Hill, in order to get some supplies. He will will remain there from the present. Have written to Mr. Pascoe. Am glad to see Horace Hope he can prescribe something which will relieve my head. (T.S.R. 37. 2 P.M. 61. S.S. 56.)

Nov. 17. Wednesday. Weather cloudy. Horace returned, after his short visit, to Mok. Hill. He is improving in health. Have written to Mrs. Bates and received letters from Calvin, Ida and Mary. The Ladies Aid Society met today at Mrs. Russell's. We learn that Sarah Smith has a third son born on the 8th inst. (T.S.R. 34. 2 P.M. 61. S.S. 55.)

Nov. 18. Thursday. A cold north wind again blew this afternoon. Georgie was so anxious to start to school again that I let him go, but he got so tired that he was feverish tonight. Have written to Calvin. During the last five weeks, he raised raised 5 and five tenths percent on his standing in his studies. (T.S.R. 36. 2 P.M. 61. S.S. 55.)

Nov. 19. Friday. Willard is now twentyone years old. Had he attained this age the first of this month, he could have voted for Governor, and then there would have been one more vote for Prohibition. He is five feet, eight inches in height, and weighs one hundred sixty pounds. So only Luther of all the children was heavier than he is. He is just as tall as Howard, but not as tall as Luther and Horace were, and taller than his sisters - Ada, Ida and Mary. I love to think and write of what he is because he is all that a young man could be an exemplary member of the church, and a dutiful and kind son. He is now teaching the school in Harmony Grove district, second year and he is still the teacher of the boys' and Bible class invited in S. school. Also he is the Lodge Deputy, and a member of the Lockeford Cornet Band, playing the tenor drum. He hopes to attend College somewhere yet and graduate, and is trying to lay up money for the same. Now that Uncle is away, he will take the whole charge of the poultry and own them on shares. He takes quite an interest in this.