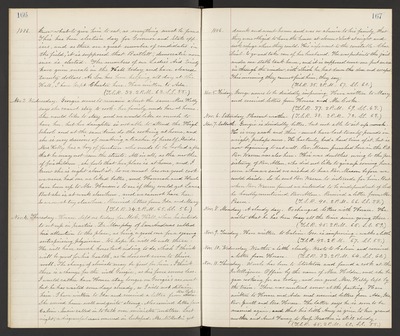 1886. know what to give him to eat, as everything must be forced. This has been election day for Governor and State offices, and as there are a great number of candidates in the field, it is supposed that Bartlett, democratic nominee is elected. The numbers of our Ladie's Aid Society have given meals in the Hall today and have cleared twenty dollars. As Lou has been helping all day at the Hall, I have kept Chester here. Have written to Ada. (T.S.R. 33. 2 P.M. 63. S.S. 55.)

Nov. 3. Wednesday. Georgie seems to remain about the same. Mrs. Kelly says she cannot stay to cook - her family needs her at home. She would like to stay and we would like so much to have her, but her daughter is not able to attend the High School and at the same time do the cooking at home, and she is very desirous of making a teacher of herself. Besides, Mrs. Kelly has a boy of fourteen who needs to be looked after that he may not run the streets. All in all, as the mother of five children, she feels that her place is at home, and I know she is right about it. So we must lose our good cook. we never had one we liked better, and Hannah and Uncle have been up to Mr. Hansen's to see if they could get Laura. But she is at work elsewhere, and we cannot have her. So we must try elsewhere. Received letters from Ida and Mary. (T.S.R. 34. 2 P.M. 65. S.S. 56.)

Nov. 4. Thursday. Horace left us today for Mok. Hill, where he intends to set up in practice. Dr. Murphy of San Andrias called his attention to the place, as being a good one for a young enterprising physician. We hope he will do well there. He will have much horseback riding to do, which I think will be good for his health, as he does not seem to thrive well. The change of climate may be good for him. I think there is a change for the with Georgie, as his fever seems less. I would rather have Horace stay longer on Georgie's account but he has waited some days already, so I will not detain him. I have written to Ida and received a letter from Mrs. Bates. She arrived home well and quite strong. Also received letter from Calvin. Susie called in to talk over minister matters. Last night, a disgraceful [?] occurred in Lockeford. Mr. McMartin got

1886. drunk and went home and was so abusive to his family that they were obliged to leave the house at eleven o'clock at night and seek refuge where they could. His wife went to the constable - Chas. Dial - to go and take care of her husband. He was put into the jail under our stable tank-house, and it is supposed some one put an axe in through the window, with which he beat down the door and escaped. This morning they cannot fired him, they say. (T.S.R. 35. 2 P.M. 67. S.S. 60.)

Nov. 7. Sabbath. Georgie is decidedly better, but not able to sit up much. He is very weak and thin - must have lost twenty pounds in weight, perhaps more. He has truly had a hard time of it, but is now beginning to eat well. Rev. Mason preached here in the P.M. Rev. Warren was also here. This was doubtless owing to the persistency of Rev. Allen, who did not like to give up coming here even when we said we wished to hear Rev. Mason before we could decide. So he sent Rev. Warren to intercede for him. But when Rev. Warren found we intended to be independent of Lodi he hardly mentioned Rev. Allen. Received a letter from Mr. Pascoe. (T.S.R. 40. 2 P.M. 66. S.S. 58.)

Nov. 11. Thursday. Uncle has been to Stockton and found a cook at the Intelligence Office by the name of Mrs. Holder, and she began cooking for us today, and our good Mrs. Kelly left by the train. There was mutual sorrow at the parting. Have written to Horace and Ada and received letters from Ada, Ida, Rev. Jewett and Bro. Horace. The latter says he is soon to be married again, and that his little Amy is given to her grand mother and Aunt Fanny to keep. Weather is still cloudy. (T.S.R. 45. 2 P.M. 60. S.S. 55.)