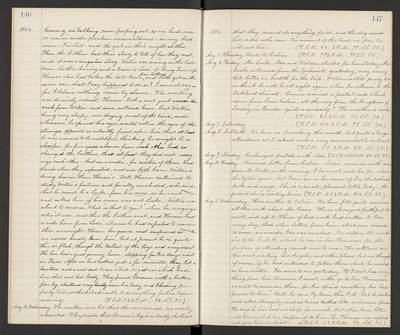 1886. hearing us talking, came peeping out, had our re-union under peculair circumstances - in my bedroom - I in bed - and the girls in their night clothes. Then the brothers had their story to tell of how they met, and it was a singular story. Willie was coming on the late train, Luther having sent a team to Lodi to bring him up. Horace also had taken the late train from Luther and both got on the same car, shall I say happened to do so? I cannot say for I believe nothing occurs by chance. The meeting was divinely ordered. Horace took a seat just across the aisle from Willie, and soon noticed him. But Willie being very sleepy, was dozing most of the time, and whenever he opened his eyes, would notice the eyes of the stranger opposite so intently fixed upon him, that at last he was aroused to be watchful, thinking he might be a sharper, for five years absence from each other had or changed the brothers, that at first they did not recognize each other. And no wonder, for neither of them had beards when they separated and now both have - Willie's being heavier than Horace's. Well, Horace continued to study Willie's features, and finally concluded, so he said, that he must be a Locke, from his nose, so he went across and asked him if his name was not Locke. Willie was about to answer, "What is that to you?" when he recognized who it was, and thus the brothers met, and Horace had a ride home from Lodi, whereas he had expected to remain there overnight. Horace has grown and improved so much we would hardly know him, but at present he is quite thin in flesh, though the tallest of the boys and very erect. He has had a good journey home, stopping for two days visit in Texas. After we had talked just a few minutes, they lit a lantern ad went out to see what dog it was which had been shot, and how badly. They found Bouncer with a broken fore leg, shattered very badly, near his body and bleeding profusely. Did not think it a advisable to do anything for him before morning. (T.S.R. 57. 2 P.M. 94. S.S. 81.)

Aug. 4. Wednesday. The weather is so hot that the new arrivals are nearly exhausted. They decide that Bouncer's leg is so badly shattered

Aug. 6. Friday. Mr. Cooke, Ada and Weldon started for home today. Mr. Cooke returned from the Yo Semite yesterday, very weary but better in health for the trip. Weldon is still poorly but we think he will be all right again when he returns to the Oakland climate. Eunice received a postal card which came from Cores. Calvin, all the way from the kingdom of of Saxony in Europe - quite a curiosity ! The weather is cooler. (T.S.R. 60. 2 P.M. 86. S.S. 74.)

Aug. 10. Tuesday. Received letter from Calvin. Susie came in with cous Joan M. Bates in the evening I have not met her for about thirty two years, but I can see in her some of her childhood's looks and ways. She is a small, pleasant little body. At present she is visiting Susie. (T.S.R. 60. 2 P.M. 100. S.S. 85.)

Aug. 11. Wednesday. Have written to Calvin. We have felt quite anxious all this week about Mr. Pascoe. He is always so faithful to write, and up to Thurs. of last week had written to Ida every day, that when letters from him, all at once ceased to come, no wonder Ida was anxious. We suppose the meeting of the G.A.R which he was in San Francisco for the purpose of attending, must now be over. The veterans are this week visiting Los Angeles, and other places, but we thought of course, if he had intended to follow them about, he would so have written. Ida said to me yesterday, "If I don't hear anything from him tomorrow, I must either go to San Francisco or write to some one there, for I'm afraid something has happened to him". Well, he came by train this P.M. but he looked and acted strangely, and at times talked like an insane person. He says he has had us sleep for a week, but when he is better will tell us what has happened to him. Dr. Thompson was called and gave him an opiate. (T.S.R. 62. 2 P.M. 97. S.S. 85.)