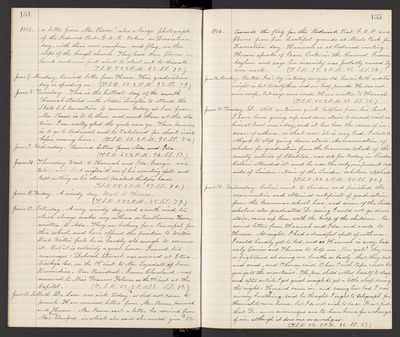 June 8. Tuesday. This is the hottest day of the month Hannah started with Addie Dayton to attend the State S.S. Convention to convene today at San Jose. Mr. Pascoe is to be there and meet them at the station. I am really glad the girls can go. Then Hannah is to go to Redwood and to Oakland for short visits before coming home. (T.S.R. 60. 2 P.M. 98. S.S. 84)

June 10. Thursday. Wrote to Hannah and Ida. Georgie was taken sick last night with one of his vomiting spells and kept nothing on his stomach for about thirtysix hours. (T.S.R. 58. 2 P.M. 87. S.S. 70)

June 12. Saturday. A very windy day, and a north wind, too, which always makes my asthma so troublesome. Have written to Ada. They are looking for a Principal for this school, and have offered the position to Willie. But Willie feels he is hardly old enough to assume it. But it is certainly a great honor. I record two marriages - Deborah Stewart was married at Etna Sisikyu Co. on the 1st inst. to Mr. Lyndall of San Bernardino. Our President - Grover Cleveland was married to Miss Frances Folsom on the 2nd inst at the Capitol. (T.S.R. 62. 2 P.M. 78. S.S. 70)

June 13. Sabbath. Dr. Lane was sick today, so did not come to preach. Have received letters from Mr. Pascoe, Hannah and Horace. Mr. Pascoe sent a letter he received from Mrs. Gov. Stanford, in which she said she would give $50.

1886. towards the flag for the Redwood Post, G.A.R and flowers from her beautiful grounds at Menlo Park for Decoration day. Hannah is at Redwood visiting. Horace speaks of Grace Locke in the Concord Insane Asylum and says her insanity was probably caused by over - work. (T.S.R. 53. 2 P.M. 81. S.S. 74.)

June 15. Tuesday. Dr. still continues quite helpless from his hurt. I have been going up and down stairs to see and wait on him, at least once a day, and it has been the cause of increase of asthma, so that now it is very bud. I shall be obliged to stop going down stairs. An examination of scholars for graduation from the Grammar Schools of the country outside of Stockton, was set for today in Linden Calvin attended it and he was the only one present outside of Linden. Nine of the Linden scholars applied. (T.S.R. 54. 2 P.M. 88. S.S. 70.)

June 16. Wednesday. Calvin went to Linden and finished the examination and obtained certificate of graduation from the Grammar school here, and seven of the Linden scholars also graduated. Dr. seeing I could not go down stairs, came up here, with the help of the children. Received letters from Hannah and Ida, and wrote to Horace. At night, I had a dreadful spell of asthma. I could hardly get to bed, and as Hannah is away, had only Eunice and Theresa to help me. Poor girls! they were so frightened at seeing me breath so badly, that they sat and cried, and Theresa said,"O how I wish Papa would let you go to the mountains". The poor child sobbed herself to sleep and after awhile I got quite enough to get a little sleep during the night. Howard came in and seeing how bad I was in my breathing, said he thought I ought to telegraph for Hannah come home, but I do not wish to do so. It is a fact that Dr. never encourages me to leave home for a change of air, although it does me so much good (T.S.R. 52. 2 P.M. 88. S.S. 67.)