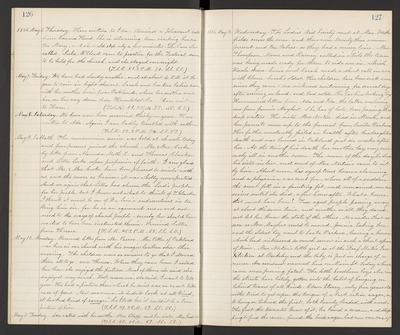 1886. May 6. Thursday. Have written to Ida. Received a pleasant call from Emma Hurd. She is returning from visiting her sister Mary, and she could stop only a few minutes. Dr. Lane also called. Lulu McCloud came to practice for the Festival soon to be held for the church, and she stayed overnight. (T.S.R. 51. 2 P.M. 70. S.S. 61.)

May 9. Sabbath. The communion service was held at church today and four persons joined the church - Mr. & Mrs. Cooke by letter from Alameda Mith. E. and Thomas Clarke and Lilla Locke upon profession of faith. I am glad that Mr. & Mrs. Cooke have been pleased to smile with us, and the more so because it was wholly unexpected. And we rejoice that Lilla has chosen the Lord's people for her people, but I know not what to think of F. Clarke. I think it must be one of Dr. Lane's indiscretions in taking him in, for he is an ignorant man and not used to the ways of church people - surely he should have waited to have been instructed therein. Received letter from Horace. (T.S.R. 45. 2 P.M. 68. S.S. 60.)

May 10. Monday. Received letter from Mr. Pascoe. Mr. Potter of Oakland was here in our church with his magic lantern show this evening. The children were so anxious to go that I allowed them all to go - even Theresa. When they came home I asked her how she enjoyed the pictures. Most them she said she enjoyed very much. "But mamma", she said, I want to tell you. He had a picture there which he said was an exact likeness of Jesus. Now mamma, it didn't look at all kind, it looked kind of savage. "So I told her it couldn't be a true picture of him. (T.S.R. 47. 2 P.M. 69. S.S. 56.)

1886. May 12. Wednesday. The Ladies Aid Society met at Mrs. Wake fields across the river, and these were twenty three women present and ten babies - so they had a merry lime. Mrs. Thompson, Moore and Barney called in while the team was being made ready for them to ride over in, which Uncle drove. Susie and Sarah made a short call in eve with Elmer - Sarah's oldest. Her children have been sick ever since they came - sea - sickness continuing for several days after arriving on land - and bad colds. She has fine looking boys. Have received letters from Ada and Ida, the latter enclosing one from Jennie Mayhew. She has of late been passing this deep waters Her sister, Mrs. Norton, died in March, and her parents came up to the funeral from Santa Barbara. Her father constantly failed in health after his daughter's death and was buried in Oakland just six weeks after her. At the time of his death, her mother lay very seriously ill in another room. The morn of the day he died his sister-in-law, and aunt of Mrs. Norton's came to sit by him. About noon, his symptoms became alarming and a physician was sent for, when all of a sudden, the aunt fell in a fainting fit, and remained unconscious until she died, a few hours after. What a house that must have been! Two aged people passing away at about the same time, and mother so ill, they dared not let her know the state of the others. No wonder that as soon as Mrs. Mayhew could be moved, Jennie, talking her and the eldest boy went to Santa Barbara, leaving a house which had witnessed so much sorrow in such a short-space of time. Mrs. Norton's little girl is at the Deaf Mute's Institution of Berkeley, and the baby is put in charge of a nurse. An accident occurred here on Main St. today which came near proving fatal. The little hoodlum boys who run the streets have lately gotten into the habit of hanging on behind teams of all kinds. Edson Steacy, only five years old either tried to get upon the tongue of a back action wagon, or to hang on behind the first, both heavily loaded with wood. The first the teamster knew of it, he heard a scream, and stopping to find the cause, found the back wagon had run over one of