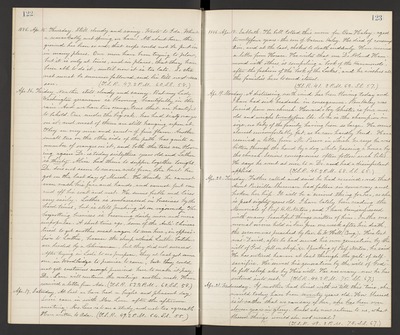 Apr. 16. Friday. Weather still cloudy and rainy. But my Lady Washington geranium is blooming beautifully in the rain. And we have two orange trees that are beautiful to behold. One under the big oak, has had sixty oranges on it, and most of them are still hanging upon it. They are very nice and sweet - of fine flavor. Another small tree on the other side of the path has quite a number of oranges on it, and both the trees are blooming again Dr. is today sixtythree years old and Luther is thirty. Alice had them to supper together tonight Dr. does not seem to recover well from the hurt he got on the last day of March. He thinks he cannot even wash his face and hands, and cannot put on and off his coat and vest. He seems feeble and tires very easily. Luther is embarrassed in business by the hard times, but is still pushing it on vigorously. The buyerthing business is becoming daily more and more unpopular. A short time ago, some of the Anti - Chinese tried to get another meat wagon to run here, in opposition to Luther, because the sheep which Luther butcher are herded by a Chinaman, but they did not succeed. After trying in Lodi to no purpose, they at last got some one in Woodbridge to promise to come, but they could not get customers enough promised here to make it pay. Dr. Lane will continue the meetings another week. Have received a letter from Ada. (T.S.R. 53. 2 P.M. 60. S.S. 58.)

1886. Apr. 18. Sabbath. The bell tolled this morn for Ben Haley - aged twenty four years - the son of Garner Haley. He died of consumption, and at the last, choked to death suddenly. Have received a letter from Horace. He writes that one Dr. Roland Hammond with others, is compiling a "Book of the Hammonds", after the fashion of the "Book of the Lockes", and he wishes all the families here to saved items. (T.S.R. 41. 2 P.M. 62. S.S. 57.)

Apr. 19. Monday. A distressing worth wind has been blowing today and I have had sick headache in consequence. Ben Haley was buried from our church. Howard's boy Chester is four mos. old and weighs twenty four lbs. So he is the champion in size, no baby of the family having been so large. He seems almost uncomfortably fat, as he can hardly bend. Have received a letter from Mr. Pascoe in which he says he was bitten through the hand by a dog while passing a house by the church. Serious consequences often follow such bites. He says he went at once to a Dr. and had a disinfectant applied. (T.S.R. 45. 2 P.M. 68. S.S. 65.)

Apr. 20. Tuesday. Father called and said he had received word that Aunt Priscilla Sherman had fallen in some way and broken her hip. It will be a serious thing for her, as she is past eighty years old. I have lately been reading the Memorials of Prop. H.B. Norton, and I have been impressed with many beautiful things written of him. In the memorial service held in San Jose one week after his death, the sermon was preached by Rev. C.W. Hill (Cong.), His text was - "David, after he had served his own generation by the will of God, fell on sleep,"x.c. Speaking of Prop. Norton, he said "He has entered heaven at last through the gate of selfsacrifice. He "served his generation by the will of God" - he fell asleep also by He is will. He was weary now he has entered into rest." (T.S.R. 44. 2 P.M. 75. S.S. 67.)

Apr. 21. Wednesday. If mother had lived with us still this time, she would today have been seventy years old. How blessed is it rather that we can say of her, she has been over eleven years in glory. Could she now return to us, what blessed things would she not reveal? (T.S.R. 49. 2 P.M. 75. S.S. 67.)