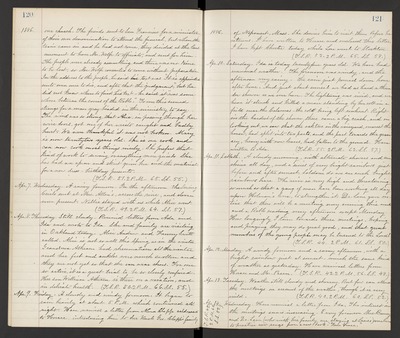 1886. our church. The friends sent to San Francisco for a minister of their own denomination to attend the funeral, but when the train came in and he had not come, they decided at the last moment to have Mr. Wolfe to officiate, and sent for him. The people were already assembling, and there was no time to be lost, so Mr. Wolfe consented to come without preparation. In the address to the people, he said his text was "It is appointed unto men once to die, and after that the judgment", but he did not know where to find his text - he said it "was somewhere between the covers of the Bible." To me this seemed strange for a man grey - headed in the ministry to say. The wind was so strong, that Alice, in passing through her wire doors, got one of her wrists caught and badly hurt. We were thankful it was not broken. Mary is now twentytwo years old. She is our cook, and can now cook most things nicely. She prefers that kind of work to sewing or anything more quiet. She has had an apron and skirt given her and the materials for a new dress - birthday presents. (T.S.R. 51. 2 P.M 65. S.S. 55.)

Apr. 8. Thursday. Still cloudy - Received letters from Ada and Ida and wrote to Ida. She and family are visiting in Oakland today. Alice Andrew and Fanny Swett called. Alice is not so well this Spring as in the winter. Grandma Athearn had rheumatism all the winter and her feet and ankles were much swollen and they are not yet so that she can wear shoes. For one so active, it is a great trial to be so closely confined. Her son William Athearn is there on a vacation, and in delicate health. (T.S.R. 50. 2 P.M. 66. S.S. 55.)

Apr. 9. Friday. a cloudy and windy forenoon. It began to rain heavily at about 5 P.M. which continued all night. Have received a letter from Alma Clapp addressed to Horace, introducing him to her Uncle Ger. Clapp's family

Apr. 10. Saturday. Ida is today twenty four years old. We have had unusual weather. The forenoon was windy, and the afternoon very rainy - the rain just poured down hour after hour. And just about sunset we had as hard a thunder shower as we ever have. The lightning was vivid, and we hear it struck and killed a more standing by her colt in a field near the Calaveras - the colt being left unhurt. Right in the hardest of the shower there came a big crash, and on looking out, we saw that the oaktree in the vineyard, nearest the house, had split into two parts, and the part towards the granary, heavy with new leaves, had fallen to the ground. Have written to Ada. (T.S.R. 55. 2 P.M. 62. S.S. 57.)

Apr. 11. Sabbath. A cloudy morning, with alternate showers and sunshine all day, and a series of very bright rainbows just before and after sunset. Seldom do we see such bright rainbows here The river is very high and threatening - so much so that a gang of men have been working all day upon Holman's Eve, to strengthen it. Dr. Lane gave notice that there will be a meeting every evening this week and a Bible reading every afternoon except Monday. How longingly I turn towards these meetings, hoping and praying they may do great good, and that great members of the young people may be turned to the Lord! (T.S.R. 44. 2 P.M. 61. S.S. 50.)

Apr. 14. Wednesday. Have received a letter from Ida, The interest in the meetings seems increasing. Every forenoon Mrs. Barney and Dr. Lane (who wish his family are staying at Susie's) come here to practise new songs from a new book - "Free Grace." (T.S.R. 42. 2 P.M. 60 S.S. 52.)