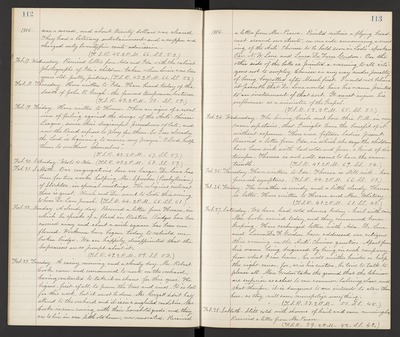 Feb. 19. Friday. Have written to Horace. There are signs of a revalion of feeling against the doings of the Anti-Chinese League, since their disgraceful procedures of late, and now the Band refuses to play for them. So I see already the Lord is beginning to answer my prayer. "O Lord, help them to overthrow themselves." (T.S.R. 42. 2 P.M. 67. S.S. 57.)

Feb. 21. Sabbath. Our congregations here are large. Dr. Lane has been for two weeks helping Mr. Sprecher (Presbyterian) of Stockton, in special meetings. The religious interest there is great. Uncle and Dr. went to Lodi this evening to hear Dr. Lane preach. (T.S.R. 44. 2 P.M. 66. S.S. 61.)

Feb. 22. Monday. A cloudy day. Received a letter from Horace, in which he speaks of a flood in Boston Bridges have been carried away and about a mile square has been overflowed. Workmen have begun today to re-build our broken bridge. We are happily disappointed that the Supervisors are so prompt about it. (T.S.R. 49. 2 P.M. 59. S.S. 53.)

Feb. 23. Tuesday. A rainy morning and a cloudy day. Mr. Robert Cooke came and commenced to work on the orchard, having contracted to take it on shares for this year. He begins, first of all, to prune the trees and vines. It is late for this work, but it must be done. Mr. Couzatt didn't half attend to the orchard and it is in a neglected condition. Mrs. Cooke is soon covering with their household goods and they are to live in our little old house, now renovated. Received

1886. a letter from Mr. Pascoe. Printed notices a flying broadcast around our streets, on one side announcing a meeting of the Anti-Chinese to be held soon in Lodi - speakers Rev. N. W. Lane and Laura De Force Gordon. On the other side of the bills is printed a warning to all citizens not to employ Chinese in any way under penalty of being boycotted after March first. I would not believe it possible that Dr. Lane would have his name printed to an instrument of that sort. It must injure his influence as a minister of the Gospel. (T.S.R. 53. 2 P.M. 65. S.S. 51.)

Feb. 24. Wednesday. The Sewing Circle met here this P.M. in my room upstairs, that I might have the benefit of it without exposure. There were fifteen ladies present. Received a letter from Ida, in which she says the children have been sick with bad colds and fever - a kind of distemper. Theresa is not well - seems to have the same trouble. (T.S.R. 41. 2 P.M. 69. S.S. 54.)

Feb. 27. Saturday. We have had cold showers today - hail with rain. Mrs. Cooke arrived today and they commenced housekeeping. Have exchanged letters with Ada. Dr. Lane and Laura De F. Gordon have addressed our citizens this evening on the Anti-Chinese question. Apart from his name being disgraced by being in such company, from what I can learn, he will neither hinder or help the right cause, for, as is his custom, he tries to talk to please all. Mrs. Gordon takes the ground that the Chinese are superior as a class to our common labouring class, and that therefore it is dangerous to our interests to allow them here, as they will soon monopolize everything. (T.S.R. 37. 2 P.M. 51. S.S. 45.)