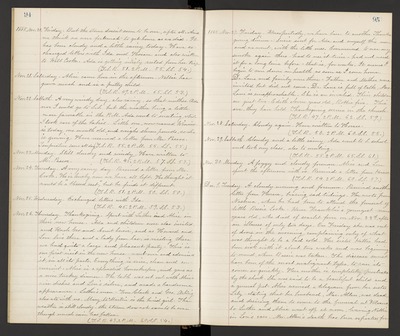 Nov. 22. Sabbath. A very windy day, also rainy, so that neither Ada nor I could go to S.S. but the weather bring a little more favorable in the P.M. Ada went to meeting, while I took care of the babies. Little one, now named Winnie is today one month old, and weighs eleven pounds, so she is growing. Have received a letter from Mr. Pascoe. Temperature same all day (T.S.R. 55. 2 P.M. 55. S.S. 55.)

Nov. 26. Thursday. Thanksgiving. Spent with Luther and Alice in their new house. Ada and children were also invited, and Uncle Geo. and Aunt Susie, and as Howard and Lou live there and a lady from Sac.is visiting there we had quite a large and pleasant party. This is our first visit in the new house - went over and admired it, in all its parts. Everything is nice, clean and convenient. Alice is a splendid housekeeper, and gave us a nice turkey dinner. The table was set out with Alice's nice dishes and Lou's silver, and made a handsome appearance. Luther's were - Tom Clark and Geo. Arling also ate with us. Mary McMartin is the hired girl. The weather is still cloudy - the storm does not seem to be over though much rain has fallen. (T.S.R. 43. 2 P.M. 60. S.S. 54.)

1885. Nov. 27. Friday. Unexpectedly, we have been to another Thanksgiving dinner. Susie sent for Ada and myself this mom and we went, with the little ones. Commenced to use my smoke again there - had to use it twice - had not used it for a long time before - that is, for weeks. It seems I begin to run down in health as soon as I come home. Dr. Lane and family were there - Father and Mother were invited but did not come. Dr. Lane is full of talk, Mrs. Lane is unapproachable. She is an invalid. Their children are just two - Edith eleven years old, Robbie five. This eve, they have held Thanksgiving service in the church. (T.S.R. 47. 2 P.M. 62. S.S. 59.)

Dec. 1. Tuesday. A cloudy morning and forenoon. Received another letter from Horace, bearing sad tidings. He wrote from Nashua, where he had been to attend the funeral of little Bessie Locke - Unce Franklin's youngest - nine years old, who died of scarlet fever on Nov. 22d, after an illness of only two days. On Friday she was out of doors in the morning, complaining only of what was thought to be a bad cold. Her sister Hattie had been sick with it about two weeks and was beginning to mend, when Bessie was taken. The disease must have been of the most malignant type, to run its course so quickly. Her mother is completely prostrated by the shock. She was said to be a beautiful child and a general pet. Alice received a telegraph from her sister Lily - stating that her husband, Mr. Allen, was dead, and desiring them to come to the funeral at Volcano. So Luther and Alice went off at noon, leaving Nellie in Lou's case. Mr. Allen's death has been expected for