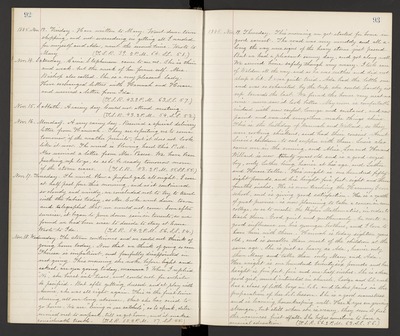 Nov. 14. Saturday. Carrie Stephenson came to see us. She is thin and weak but the wreck of her former self. Mrs. Bishop also called. She is a very pleasant lady. Have exchanged letters with Hannah and Horace and received a letter from Ida. (T.S.R. 43. 2 P.M. 63. S.S. 57.)

Nov. 16. Monday. A very rainy day. Received a special delivery letter from Hannah. They are expecting us to come tomorrow, if the weather permits, but it does not look like it now. The wind is blowing hard this P.M. Also received a letter from Mr. Pascoe. We have been packing up to go, so as to be ready tomorrow morn if the storm ceases. (T.S.R. 53. 2 P.M. 55. S.S. 55.)

Nov. 17. Tuesday. The wind blew a perfect gale all night. I rose at half past four this morning, and as it continued so cloudy and windy, we concluded not to try to travel with the babies today, so Mr. Cooke went down town and telegraphed that we would not come. Soon after sunrise, it began to pour down rain in torrents, so we found we had been wise to decide to stay at home. Wrote to Ida. (T.S.R. 54. 2 P.M. 56. S.S. 54.)

Nov. 18. Wednesday. The storm continues and we could not think of going home today. Now that we think of going so soon Theresa is impatient, and fearfully disappointed in not going. This morning she woke before light and asked, "are you going today, mamma?" When I replied, "No", she burst into tears, and could not for awhile be pacified. But after getting dressed and at play with Annie, she was all right again. This is the first time during all our long absence, that she has cried to go home. We are "living in our satchels", so to speak, determined not to unpack, till we get home, and it makes considerable trouble. (T.S.R. 55. 2 P.M. 57. S.S. 55.)

1885. Nov. 19. Thursday. This morning we got started for home in good earnest. The road was very muddy and all along the way were signs of the heavy storm just passed. But we had a pleasant sunny day, and got along well. We arrived home safely though very weary. I took care of Weldon all the way, and as he was restless and did not sleep a bit. I was quite tired. Ada had the little one and was so exhausted by the trip, she could hardly sit up towards the last. We found the house very neat and nice - never saw it look better. My room is comfortable indeed with new carpet, lounge and curtains, and new paint and varnish everywhere, make things shine. This is the birthday of Hannah and Willard, so they were cooking chickens, and had their cousins - Aunt Susie's children - to eat supper with them. Susie also came over in the evening, and Alice, Lou and Howard. Willard is now twenty years old and is a good-sized boy, only Luther being heavier at his age, and Luther and Horace taller. His weight is one hundred fiftyeight pounds, and his height five feet-eight and three-fourths inches. He is now teaching the Harmony Grove school, and is giving good satisfaction. He is a youth of great promise - is now planning to take a course in some college, so as to master the Higher Mathematics, in order to teach them. Good, quiet and gentlemanly, he exerts a good influence on his younger brothers, and I love to have him with them. Hannah is today eighteen years old, and is smaller than most of the children at the same age. She is just as heavy as Ada, heavier only than Mary and taller than only Mary and Ada. Her weight is one hundred twentysix pounds and her height is five feet, five and one-half inches. She is a dear good girl, much interested in church, Lodge and S.S. work has a class of little boys in S.S. and takes pains in the preparation of her S.S. lesson. She is a good seamstress and is learning housekeeping well. Her eyes are growing stronger, but still when she is weary, they seem to feel the weariness first of all. She hopes sometime to have a musical education. (T.S.R. 56. 2 P.M. 63. S.S. 56.)