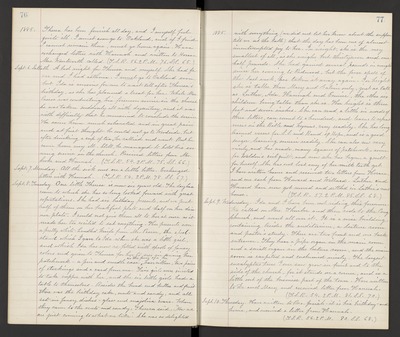 Sept. 6. Sabbath. A bad night for Theresa and myself. She had fever and I had asthma. I must go to Oakland soon, but Ida is anxious for me to wait till after Theresa's birthday, as she has planned a treat for her. While Mr. Pascoe was conducting his forenoon service in the church he was taken suddenly ill with dysentery, and it was with difficulty that he remained to conclude the service. He came home much exhausted and in great pain and at first thought he could not go to Woodside, but after drinking a cup of tea, he rallied and went. But he came home very ill. Still, he managed to hold his evening service in the church. Received letters from Mr. Cooke and Hannah. (T.S.R. 54. 2 P.M. 75. S.S. 66.)

Sept. 8. Tuesday. Our little Theresa is now six years old. The day has come to which she has so long looked forward with great expectations. She had six birthday presents, and we put half of them on her breakfast plate and half on her dinner plate. I could not give them all to her at once as it made her too excited to eat everything. Her presents were - a pretty white-handled knife from Mr. Pascoe, the spool-stand which I gave to Ida when she was a little girl, and which Ida has now re-filled with spools of fancy colors and given to Theresa for her to use in sewing her patchwork - a pin and needle case in the form of a box, hair ribbon, two pairs of stockings and a card from me. Five girls were invited to take supper with her, and the six little girls had a table to themselves. Beside the bread and butter and fruit there was the birthday cake, nuts and candy, and all set in fancy dishes - glass and majolica ware. When they came to the nuts and candy, Theresa said, "Now we are just coming to what we like." She was so delighted

1885. with everything (we did not let her know about the supper till we set the table) that the day has been one of almost uninterrupted joy to her. In weight, she is the very smallest of all, as she weighs but thirtyseven and one-half pounds. She had gained several pounds in weight since her coming to Redwood, but the fever spell of the last week, has taken it away again. In height she is taller than Mary and Calvin only, just as tall as Luther, Ada, Hannah and Eunice, the other six children being taller than she is. Her height is three feet and seven inches. She can read a little in words of three letters, can count to a hundred, and learns to repeat verses in the Bible and hymns, very readily. She has long learned verses for S.S. and Band of Hope, and is a good singer, learning music readily. She can also sew very nicely, and has made, many squares of patchwork - some for Weldon's crib quilt, and now she has begun a quilt for herself. She has not lost any of her milk teeth yet. I have written home and received two letters from Horace, and one each from Howard and Willard. Luther and Howard have now got moved and settled in Luther's new house. (T.S.R. 57. 2 P.M. 85. S.S. 68.)

Sept. 9. Wednesday. Ida and I have been out riding this forenoon. We called on Mrs. Thurber and them rode to the Cong. Church, and went all over it. It is a nice building, containing besides the auditorium, a lecture room and pastor's study. There are two front and one back entrance. They have a pipe organ in the main room and a small organ in the lecture room, and the main room is carpeted and cushioned nicely. The largest eucalyptus trees I ever saw grow in front and to the side of the church, for it stands on a corner, and is a little out of the business part of the town. Have written to Dr. and Mary and received letter from Hannah. (T.S.R. 54. 2 P.M. 81. S.S. 70.)