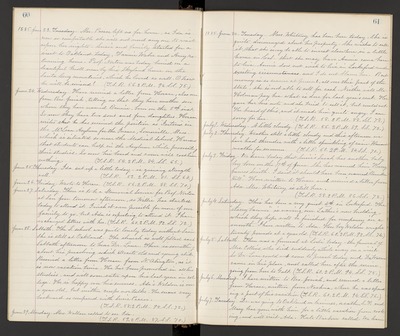 1885. June 23. Tuesday. Mr. Pascoe left us for home, as Ida is now so comfortable she will not need any one to wait upon her nights. Susie and family started for a visit to Oakland today, Fannie Weber and Amy returning home. Prof. Norton was today buried on a beautiful knoll nearby his Skyland home on the Santa Cruz mountains, which he loved so well. O how he will be missed! (T.S.R. 56. 2 P.M. 92. S.S. 75.)

June 24. Wednesday. Have received a letter from Horace, also one from Bro. Josiah, telling us that they have another son whom they have named Bennie, born on the 5th inst. So now they have two sons and four daughters. Horace writes that he has received the position as "Intern" in the McLean Asylum for the Insane, Somerville, Mass. which is situated so near the Medical School, Harvard that students can help in the Asylum while prosecuting their studies. So now his board and room will cost him nothing. (T.S.R. 54. 2 P.M. 84. S.S. 65.)

June 27. Saturday. There is to be a Memorial Service for Prof. Norton at San Jose tomorrow afternoon, so Willie has started today to attend it. I wish it were possible for more of our family to go, but Ada is expecting to attend it. I have exchanged letters with her. (T.S.R. 60. 2 P.M. 92. S.S. 72.)

June 28. Sabbath. The S. school was quite lonely today without Susie. She is still at Oakland. The church is well filled each Sabbath afternoon to hear Dr. Lane. There is something about his preaching which attracts old and young alike. Received a letter from Horace from N. Abington, as it is now vacation time. He has been promoted in all his studies, and will soon enter upon his last year in college. He is happy over his success. Ada's Weldon is now a year old, but neither creeps nor talks. He seems very backward as compared with Susie Pascoe. (T.S.R. 58. 2 P.M. 92. S.S. 72.)

1885. June 30. Tuesday. Mrs. Whitney has been here today. She is quite discouraged about her property. She wishes to sell it, that she may be able to invest elsewhere in a little home in Cal. that she may have Annie come here to live. Annie does not wish to live in Lockeford under existing circumstances, and I do not blame her. But money is so scarce at present, all over this part of the State, she is not able to sell for cash. Neither will Mr. Holman pay her what is due for last year's rent. He gave her his note and she tried to sell it, but could not. He heard of this, and it made him quite angry. I am sorry for her. (T.S.R. 58. 2 P.M. 88. S.S. 78.)

July 3. Friday. We learn today that Susie's Sarah has another baby boy born on the 17th of June. She has named him Harry James Smith. I said it should have been named "Bunker Hill." Have written to Horace and received a letter from Ada. Mrs. Whitney is still here. (T.S.R. 58. 2 P.M. 86. S.S. 72.)

July 4. Saturday. This has been a very quiet 4th in Lockeford. The "starry banner" is waving over Luther's new building, which they hope will be finished for occupancy in a month. I have written to Ada. Her boy Weldon weighs twenty pounds at a year old. (T.S.R. 60. 2 P.M. 92. S.S. 74.)

July 7. Tuesday. Dr. was going to Oakland on business, or rather S.F. and Mary has gone with him for a little vacation from cooking, and will visit Ada. Kate Barbour called. We learn