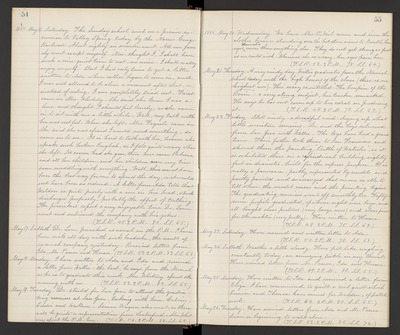 1855. May 16. Saturday. The Sunday school went on a picnic excursion to Valley Spring today by the Narrow Garage Railroad. About eighty in number went. All our family went except myself. "Now", thought I, "I shall have such a nice quiet-time to rest - no noise - I shall really enjoy myself." But I had only time to get a letter written to Ada when callers began to come in, and I was not allowed to be alone a moment after that, so, instead of resting, I am completely tired out. First came in Mrs. Whitney. She said she knew I was alone and thought I should feel lonely, so she came in to sit with me a little while. Well, my talk with her was restful. When she left, Mrs. Fogarle came in. She said she was afraid I would need something, so came in to see. It is hard to talk with her, because she speaks such broken English, so I felt quite weary when she left. No sooner had she gone, then here came Rebecca and all her children, and her children were very tire some meddling with everything. Well, this must have been the best way for me to spend the day, or it would not have been so ordered. A letter from Ada tells that Weldon is quite poorly with a sore in his head, which discharges profusely, probably the effect of teething. The picnickers report a very enjoyable time. Dr. Lane went and enlivened the company with his jokes. (T.S.R. 45. 2 P.M. 80. S.S. 65.)

May 19. Tuesday. Dr. Started for San Jose to attend the graduating exercises at San Jose, taking with him, Calvin, Eddie and Wallace. Simon Wagner also went, so there will be quite a representation from Lockeford. Mrs. Whitney spent the P.M. here. (T.S.R. 56. 2 P.M. 82. S.S. 65.)

May 21. Thursday. A very windy day. Willie graduates from the Normal School today with the high honors of the class (there is no highest now). His essay is entitled. "The Empire of the Brain" - a very strong subject, his teacher remarked. He says he has not come up to his ideal in producing it. (T.S.R. 48. 2 P.M. 78. S.S. 63.)

May 22. Friday. Still windy - a dreadful wind - drying up what little moisture remains. Dr. and the boys returned from San Jose with Willie. The boys have had a grand time. Their father took them to San Francisco and showed them the painting "Battle of Waterloo", as it os exhibited there in a cylindrical building, eighty feet in diameter, built for the express purpose. It is really a panorama, partly represented by models and partly painted, and so arranged that no one is able to tell where the model ceases and the painting begins. The graduating exercises went off smoothly too. Fiftyseven pupils graduated, of whom eight were boys, and all bought class pictures (very large ones) and class pins for the necktie (very pretty). Have written to Horace. (T.S.R. 48. 2 P.M. 75. S.S. 63.)