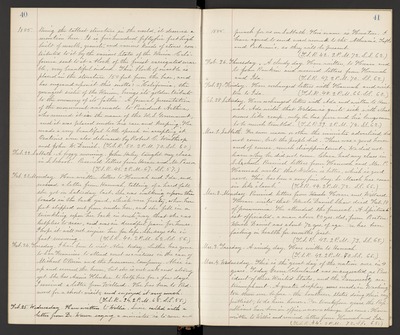 1885. Being the tallest structure in the world, it deserves a mention here. It is five hundred fiftyfive feet high built of marble, granite, and various kinds of stones contributed to it by the various states of the Union. California sent to it a block of the finest variegated marble, very beautiful indeed. This block of marble is placed in the structure 150 feet from the base, and has engraved upon it this motto: - "California, the youngest sister of the Union, brings its golden tribute to the memory of its father." A formal presentation of the monument was made to President Arthur, who received it in the name of the U.S. Government, and it was placed under his care and keeping. He made a very beautiful little speech in accepting it. Oratious were also delivered by Robert C. Winthrop and John W. Daniel. (T.S.R. 50. 2 P.M. 70. S.S. 60.)

Feb. 23. Monday. Have written letters to Hannah and Ida, and received a letter from Hannah, telling of a hard fall she got on Saturday last. She was walking upon the boards in the back yard, which were frosty, when her feet slipped out from under her, and she fell in a twinkling upon her back in such a way that she was helpless to rise, and was in dreadful pain for hours. I hope it will not injure her for life. She says she is fast recovering. (T.S.R. 40. 2 P.M. 62. S.S. 56.)

Feb. 24. Tuesday. I have been to visit Alice today. Luther has gone to San Francisco to attend court as a witness in the case of Michael O'Brien and the Insurance Company. Alice is up and around the house, but she is not well and strong yet. She has Annie Klinkee to help her for a few days. I received a letter from Willard. He has been to Redwood for a short visit, and enjoyed it very much. (T.S.R. 34. 2 P.M. 65. S.S. 55.)

Feb. 25. Wednesday. Have written to Willie. Susie called with a letter from Dr. Warren saying a minister is to come and

Mar. 1. Sabbath. For some reason or other the minister advertised did not come, but the people did. There was a good house and of course, much disappointment. We did not learn why he did not come. Clara had my class in S. school. Received letters from Hannah and Mr. P. Hannah writes that Weldon is better, which is good news. This has been a very fine day. So March has come in like a "lamb." (T.S.R. 44. 2 P.M. 72. S.S. 66.)

Mar. 2. Monday. Received letters from Horace and Willard. Horace writes that Uncle Daniel Shaw died Feb. 18 of pneumonia. He attended the funeral. A Spiritualist officiated - a man above 80 yrs. old, from Boston. Uncle Daniel was about 72 yrs. of age. He has been failing in health for months past. (T.S.R. 43. 2 P.M. 73. S.S. 65.)

Mar. 4. Wednesday. This is the "great day" of the nation once in 4 years. Today Grover Cleveland was inagurated as President of these United States, and the Democrats are triumphant. A greater display was made in Washington than ever before - the Southern States doing their very prettiest, to do him honor. For twentyfour years, the Republicans have been in office - now a change has come. Have written to Willie and received letters from Hannah and Ida. (T.S.R. 44. 2 P.M. 72. S.S. 65.)