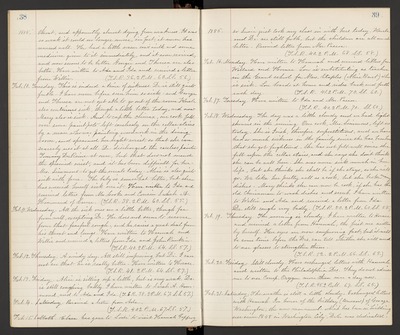 1885. throat, and apparently almost dying from weakness. It was so weak it could no longer nurse, in fact, it never has nursed well. He had a little warm cow's milk and some medicine given to it immediately, and it soon revived, and now seems to be better Georgie and Theresa are also better. Have written to Ada and Ida and received a letter from Willie. (T.S.R. 36. 2 P.M. 60. S.S. 56.)

Feb. 10. Tuesday. This is indeed a time of sickness. Dr. is still quite feeble - I have never before seen him so sick and George and Theresa are not yet able to go out of the room. Uncle also continues sick, though a little better today, and now Mary also is sick. And to cap the climax, our cook fell over some paint pots left carelessly on the cellar stairs by a man who was painting woodwork in the dining - room, and sprained her right wrist, so that she can scarcely use it at all. Dr. discharged the careless painter. Tommy DuRaine at once, but that does not mend the sprained wrist, and it has been difficult for her - Ms. Simmons - to get the meals today. Alice is also quite sick with fever. The baby is somewhat better, but she has worried herself sick over it. Have written to Ida and received letters from Mr. Cooke and Cousin Sarah A. Hammond of [?]. (T.S.R. 38. 2 P.M. 60. S.S. 55.)

Feb. 11. Wednesday. All the sick ones are a little better, though far from well, excepting Dr. He does not seem to recover from that fearful cough, and he raises a great deal from his throat and lungs. Have written to Hannah and Willie and received letters from Ida and John Rankin. (T.S.R. 40. 2 P.M. 64. S.S. 57.)

Feb. 16. Monday. Have written to Hannah and received letters from Willard and Horace. Lou is substituting as teacher in the Grant school for Mrs. Staples (Alice Burt) who is sick. Lou boards at home and rides back and forth each day. (T.S.R. 41. 2 P.M. 70. S.S. 60.)

Feb. 18. Wednesday. The day was a little cloudy and we had light showers in the evening. One cook, Ms. Simmons, left us today. She is Irish, therefore superstitious, and we have had so much sickness in the family since she has been here that she got frightened. She has not felt well since she fell upon the cellar stairs, and she says she don't think she can be well here. She was never sick much in her life, but she thinks she shall be if she stays, so she will go. We like her pretty well as a cook, but she broke many dishes. Mary thinks she can now be cook, if she has the old Chinaman to wash dishes and scrub. I have written to Willie and Ada and received a letter from Ida. Dr. Still coughs very badly. (T.S.R. 50. 2 P.M. 60. S.S. 58.)

Feb. 19. Thursday. The morning is cloudy. I have written to Horace and received a letter from Hannah, the first one written by herself. Her eyes are now improving fast, but it will be some time before the Drs. can tell whether she will need to use glasses to strengthen them. (T.S.R. 52. 2 P.M. 66. S.S. 63.)

Feb. 21. Saturday. The weather is still a little cloudy. Exchanged letters with Hannah. In honor of the birthday (tomorrow) of George Washington, the new monument which has been in building ever since 1848 in Washington City, D.C. was dedicated.