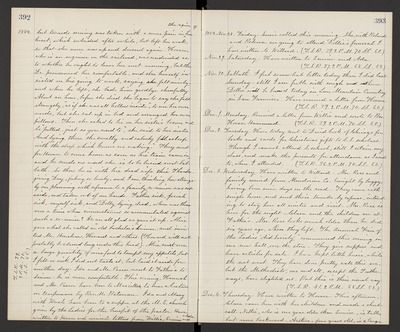 1884. but towards evening was taken with a severe pain in the region of her heart, which subsided after awhile, but left her weak, so that she never was up and dressed again. Horace, who is an engineer on the railroad, was undecided as to whether he ought to leave her next morning, but the Dr. pronounced her comfortable, and she herself insisted on his going to work, saying she felt nicely, and when he left, she bade him goodbye cheerfully. About an hour, before she died she began to say she felt strangely, "as if she was all hollow inside," to use her own words, but she sat up in bed and arranged her own pillows. Then she asked to lie on her sister's bosom and be "petted, just as you used to," she said to her sister. And lying there she sweetly and calmly fell asleep with "the sleep which knows no waking." They sent for Horace to come home as soon as his train came in, and he sends us word she is to be buried next Sabbath. So there he is with his dead wife this Thanksgiving Day, feeling so lonely, and I am thinking how strangely our planning with reference to a family re-union was set aside, and taken out of our hands. Father sick, Josiah sick, myself sick, and Dolly lying dead, when was there ever a time when circumstances so accumulated against such a re-union? We are all glad we gave it up. Alice gave what she called an "old bachelor's [?], and invited Mr. Henshaw, Howard and others. (Howard will not probably be classed long under this head). Alice sent over a large quantity of nice food to tempt my appetite, but I felt so sick I did not taste it, but laid it aside for another day. Ida and Mr. Pascoe went to Father's to dinner - he is more comfortable. This evening, Hannah and Mr. Pascoe have been to Macville to hear a lecture on temperance by Rev. Mr. Bateman. Ida and Mary with Uncle have been to a supper at the M.E. church given by the Ladies for the benefit of the pastor. Have written to Horace and received letters from Willie, Eunice and Ada. T.S.R. 39.2 P.M. 70. S.S. 65.)

Nov. 30. Sabbath. I feel somewhat better today than I did that Sunday - still I am feeble with cough and asthma. Dollie will be buried today in Lone Mountain Cemetery in San Francisco. Have received a letter from Horace. (T.S.R. 39. 2 P.M. 70. S.S. 60.)

Dec. 2. Tuesday. Have today sent to David Cook of Chicago for books and cards for Christmas gifts to S.S. scholars. Though I cannot attend S. school, still I retain my class, and make the presents for attendance as I used to, when I attended. (T.S.R. 36. 2 P.M. 70. S.S. 60.)

Dec. 3. Wednesday. Have written to Willard. Mr. Ross and family arrived from Mendocino Co. tonight by buggy, having been nine days on the road. They came with single horse, and sent their trunks by express, intending to stay here all winter and visit Mr. Ross is here for the night. Clara and the children are at Father's. Mr. Ross looks much older than he did six years ago, when they left. The Annual Fair of the "Ladies Aid Society" commenced this evening in our new hall, over the store. They give suppers and have articles for sale. I have kept little Susie, while the rest went. They have done pretty well this eve, but the Methodists, one and all, except the Tretheways, have slighted us. But this is their usual way. (T.S.R. 41. 2 P.M. 68. S.S. 58.)

Dec. 4. Thursday. Have written to Horace. This afternoon, Clara came here with her children and made a short call. Nettie, who is one year older than Eunice, is taller but more backward. Arthur, four years old, is a large