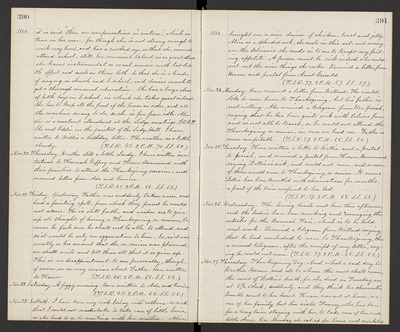 1884. it is said "there are compensations in nature", which is true in her case, for though she is not strong enough to work very hard, and has a crooked eye so that she cannot attend school, still her musical talent is so great, that she learns instrumental or vocal music with but little effort, and excels in them both. So that she is a leader of singing in church and S. school, and desires much to get a thorough musical education. She has a large class of little boys in S. school, in which she takes great interest. She has to keep all the front of the house in order, and all the machine sewing to do, so she is far from idle. Also she is a constant attendant at the Lodge meetings, I.O.G.T. She and Eddie are the janitors of the Lodge Hall. I have written to Willie a birthday letter. The weather is a little cloudy. (T.S.R. 41. 2 P.M. 70. S.S. 62.)

Nov. 20. Thursday. Weather still a little cloudy. I have written invitations to Hannah Geffroy and Horace Hammond with their families to attend the Thanksgiving reunion, and received letters from Ada and Eunice. (T.S.R. 43. 2 P.M. 66. S.S. 66.)

Nov. 21. Friday. Yesterday Father was suddenly taken worse, and had a fainting spell, from which they feared he would not recover. He is still feeble, and wishes us to give up all thought of having a Thanksgiving re-union, because he feels sure he shall not be able to attend, and so it would be only an aggravation to him. So, as it was mostly on his account that the re-union was planned, we shall write and tell them all that it is given up. This is no disappointment to me personally, though, of course, we are very anxious about Father. Have written to Horace. (T.S.R. 45. 2 P.M. 66. S.S. 58.)

Nov. 23. Sabbath. I have been very sick today with asthma - so sick that I could not undertake to take care of little Susie, so she had to go to meeting with her mother. Alice

1884. brought me a nice dinner of chicken, toast and jelly. Alice is a splendid cook, she excels in this art, and many are the delicacies she sends in to me to tempt my failing appetite. A person must be sick indeed, who could not eat the nice things she cooks. Received a letter from Horace and postal from Aunt Gerould. (T.S.R. 37. 2 P.M. 67. S.S. 57.)

Nov. 24. Monday. Have received a letter from Willard. He would like to come home to Thanksgiving, but his father is not willing. Also received a telegram from Bro. Josiah, saying that he has been quite sick with bilious fever and is not able to travel, so he could not attend the Thanksgiving re-union, in case we had one. Father is more comfortable. (T.S.R. 37. 2 P.M. 65. S.S. 60.)

Nov. 25. Tuesday. Have written a letter to Willie and a postal to Josiah, and received a postal from Horace Hammond saying Dollie is sick, and could not come, and so none of them would come to Thanksgiving re-union. It seems Dollie has been troubled with rheumatism for months, a part of the time confined to her bed. (T.S.R. 37. 2 P.M. 68. S.S. 60.)

Nov. 26. Wednesday. The Sewing Circle met here this afternoon, and the ladies have been marking and arranging the articles for the Annual Fair, which is to be held next week. Received a telegram from Willard saying that he had concluded to come to Thanksgiving, then a second telegram, after the receipt of my letter, saying he could not come. (T.S.R. 37. 2 P.M. 65. S.S. 56.)

Nov. 27. Thursday. Thanksgiving Day. And what a sad day to Brother Horace and all to whom the news shall come, the news of Dollie's death, for she died on Tuesday eve at 8 1/2 o'clock, suddenly, and they think her rheumatic trouble went to her heart. Horace was not at home, no one of her family but her sister Fanny, who has been for a long time staying with her, to take care of her and little Amy. On Monday she sat up for hours and crocheted