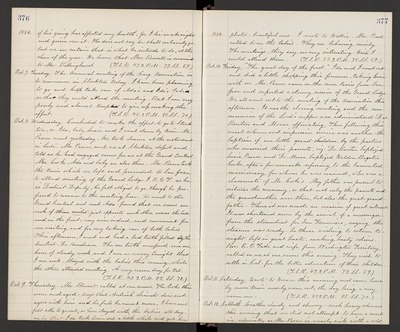 Oct. 7. Tuesday. The Annual meeting of the Cong. Association is to commence in Stockton today. I have been planning to go and help take care of Ada's and Ida's babies so that they could attend the meeting. But I am very poorly and almost temp to give up making the effort. (T.S.R. 45. 2 P.M. 80. S.S. 70.)

Oct. 8. Wednesday. Concluded to make the effort to go to Stockton, so Ida, baby Susie and I went down by train, Mr. Pascoe went yesterday. We took dinner at the restaurant in Lodi. Mr. Pascoe met us at Stockton depot and told us he had engaged rooms for us at the Grand Central . Mr. Cooke, Ada and baby are also there. Mr. Pascoe took the train which we left and proceeded to San Jose to attend meeting of the Grand Lodge I.O.G.T as he is District Deputy, he felt obliged to go, though he preferred to remain to the meeting here. We went to the Grand Central and met Ada found that our rooms are each of them suites, just opposite each their across the hall and in the front - very nice indeed, and convenient for our visiting and for my taking care of both babies This afternoon, I went and had a bad tooth filled by the dentist, Dr. Henderson. The one tooth occupied over an hour of steady work, and I am so weary tonight that I am sick. Stayed with the babies this evening, while the others attended meeting. A very warm day for Oct. (T.S.R. 47. 2 P.M. 83. S.S. 72.)

Oct. 9. Thursday. Mr. Stewart called at our rooms. He looks thin worn and aged - says that Antioch climate does not agree with him and he feels he must move. I have and felt able to go out, so I have stayed with the babies all day, only that Ida took Susie little while and got her

Oct. 10. Friday. "The great day of the feast." Ida and I went out and did a little shopping this forenoon, taking Susie with us. Mr. Pascoe came on the noon train from San Jose and reported a stormy session of the Grand Lodge. We all went out to the meeting of the association this afternoon. It was the closing meeting and the communion of the Lodi's supper was administered Drs. Benton and Mooar officiating. Then following this most solemn and impressive service was another the baptism of our little grand children, buy the pastors who married their parents, viz! Dr. Benton baptized Susie Pascoe and Dr. Moore baptized Weldon Bagster Cooke, after a few remarks referring to the lamented missionary for whom he was named, who was a classmate of Mr. Cooke's. My father was present to witness the ceremony, so that not only the parents and the grandmother were there, but also the great-grandfather. Thus it was made an occasion of great interest. It was shortened in some by the arrival of a messenger from the steamboat for San Francisco, saying the steamer was ready. So those wishing to return tonight left in great haste, making hasty adieus. Rev. E. O. Tade and wife from Washington Territory called on us at our rooms this evening. They wish to settle in Cal. for the better education of their children. (T.S.R. 49. 2 P.M. 73. S.S. 69.)

Oct. 12. Sabbath. Weather cloudy and showery - such heavy showers this evening that we did not attempt to have a meeting, especially as Mr. Pascoe is nearly sick with a cold.