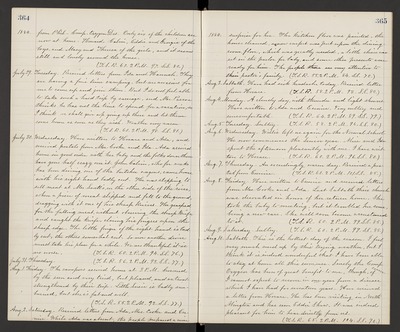 July 29. Tuesday. Received letters from Ida and Hannah. They are having a fine time camping, but are anxious for me to come up and join them. But I do not feel able to take such a hard trip by carriage, and Mr. Pascoe thinks he has not the time to spend for a vacation, so I think we shall give up going up there and let them come home as soon as they wish. Weather very warm. (T.S.R. 60. 2 P.M. 98. S.S. 81.)

July 30. Wednesday. Have written to Horace and Ada, and received postals from Mr. Cooke and Ida. Ada arrived home in good order with her baby and the folks down there have gone half crazy over it. John Calvin, who for weeks has been driving one of the butcher wagons, came home with his right hand badly cut. He was stopping to sell meat at Mr. Swett's, on the other side of the river, when a piece of meat slipped and fell to the ground, dragging with it one of his sharp knives. He grasped for the falling meat, without observing the sharp knife and caught the knife, closing his fingers upon the sharp edge. The little finger of the right hand is badly cut, the others somewhat cut. So near another driver must take his place for a while. We are thankful it is no worse. (T.S.R. 60. 2 P.M. 94. S.S. 76.)

Aug. 2. Saturday. Received letters from Ada, Mr. Cooke and Eunice. While Ada was absent, the people prepared a nice

1884. surprise for her. The kitchen floor was painted, the house cleaned, a new carpet was put upon the dining- room, floor, which was greatly needed, a little chair was set in the parlor for baby, and some other presents were ready for him. The people there are very attentive to their pastor's family. (T.S.R. 55. 2 P.M. 84. S.S. 70.)

Aug. 8. Friday. Have written to Eunice and received letters from Mr. Cooke and Ada. Last Sabbath their church was decorated in honor of her return home. She took the baby to meeting, but it troubled her some, being a new care. She will soon become accustomed to it. (T.S.R. 60. 2 P.M. 99. S.S. 85.)

Aug. 10. Sabbath. This is the hottest day of the season. I feel very much used up by this trying weather, but I think it is indeed wonderful that I have been able to stay at home all this summer. Surely the Comp. Oxygen has been of great benefit to me, though, of course I cannot expect to recover in one year from a disease which I have had for seventeen years. Have received a letter from Horace. He has been visiting in North Abington and has seen Eddie Shaw. It was indeed. pleasant for him to hear directly from us. (T.S.R. 65. 2 P.M. 104. S.S. 90.)