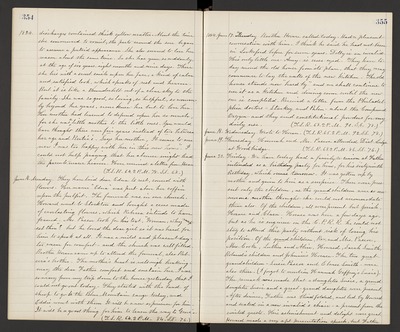 1884. discharge contained thick yellow matter. About the time she commenced to vomit, the parts around the sore began to assume a putrid appearance. She also seemed to lose her reason about the same time. So she has gone so suddenly, at the age of six years, eight months and nine days. There she lies with a sweet smile upon her face, a kind of calm and satisfied look, which speaks of rest and heaven. But it is like a thunderbolt out of a clear sky to the family. She was so good, so loving, so helpful, so womanly beyond her years, none knew her but to love her. Her mother had learned to depend upon her so much, for she was a little mother to the little ones. You would have thought there were five years instead of two between her age and Bertie's. Says her mother, It seems to me now I was too happy with her in this new home." I could not help praying that her absence might lead the parents nearer heaven. Have received a letter from Horace. (T.S.R. 64. 2. P.M 78. S.S. 68.)

June 16. Monday. They have laid dear Edna to rest, covered with flowers. Her name "Edna" was put above her coffin upon the pulpit. The funeral was in our church. Howard went to Stockton and bought a cross made of everlasting flowers, which Rebecca intends to have framed. Mr. Pascoe took for his text, "Woman, why [?] thou?" but he loved the dear girl so it was hard for him to speak at all. It was a mild and pleasant day too warm for comfort - and the church was well filled. Brother Horace came up to attend the funeral, also Rebecca's brother. The mother's heart is well sigh breaking may the dear Father comfort and sustain her. I was so weary from my trip down to the house yesterday that I could not go out today. They started with the band of sheep to go to the Blue Mountain range today, and Eddie went with them It will be a new experience for him. It will be a good thing for him to learn the way to Greve's. (T.S.R. 64. 2 P.M. 84 S.S. 76.)

1884. June 17. Tuesday. Brother Horace called today. Had a pleasant conversation with him. I think he said he had not been in Lockeford before for seven years. Dolly is an invalid. His only little one - Amy - is cross-eyed. They have today moved the old house from its place, that they may commence to lay the walls of the new kitchen. The old house stands now "hard by" and we shall continue to use it as a kitchen and dining room until the new one is completed. Received a letter from the Philadelphia doctors - Starkey and Palen - about the Compound Oxygen and they send constitutional powders for my daily use. (T.S.R. 68. 2 P.M. 90. S.S. 78.)

June 20. Friday. We have today had a family re-union at Father intended as a birthday party for him, for his sixty ninth birthday, which occurs tomorrow. It was gotten up by mother and given to him as a surprise. There were present only the children, as the grand children were so numerous mother thought she could not accommodate them also. Of the children, all were present but Josiah, Horace and Clara. Horace was here a few days ago, but as he is engineer on the C.P.R.R. he could not stay to attend this party without risk of losing his position. Of the grand children, Rev. and Mr. Pascoe, Mrs. Cooke, Luther and Alice, Howard, Sarah Smith, Roland's children and Johnnie's Horace. The two great grandchildren - Susie Pascoe and Elmer Smith - were also there. (I forgot to mention Hannah Geffroy's Susie). The remark was made that a daughter were present. After dinner, Father was blind folded, and led by Howard and seated in a new invalid's chair - a present from the united guests. His astonishment and delight were great. Howard made a very apt presentation speech, but Father