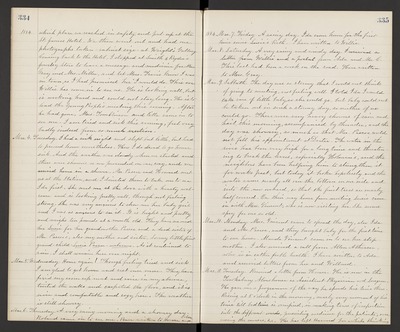 1884. which place we reached in safety, and put up at the St. James Hotel. We then went out and had our photographs taken - cabinet size - at Wright's Gallery. Coming back to the Hotel, I stopped at Smith & Ryder's Jewelry Store to leave a message and medicine for Mrs. Gray and Mrs. Miller, and let Mrs. Travis know I was in town, as I had promised her I would do. This eve Willie has come in to see us. He is looking well, but is working hard and could not stay long. He is to lead the Young People's meeting this evening. After he had gone. Mrs. Tomlinson and Etta came in to see me. I am tired and sick this evening, feel very badly indeed from so much exertion.

Mar. 4. Tuesday. I had sick night and slept but little, but had to proceed home nevertheless. How I do dread to go home sick. And the weather was cloudy when we started and there were showers as we proceeded on our way, and we arrived home in a shower. Mr. Pascoe and Howard met us at the Station, and I directed them to take me to see Ida first. She met at the door with a hearty welcome and is looking pretty well, though and feeling strong. She was very anxious to show me her baby girl and I was as anxious to see it. It is bright and pretty and weighs ten pounds at a month old. They have named her Susie for her grandmother Pascoe and a dead sister of Mr. Pascoe's, also my mother and sister. So my little first grand-child Susie Pascoe - welcome. As it continued to rain, I shall remain here overnight.

Mar. 5. Wednesday. Home again! Though feeling tired and sick I am glad to get home and rest once more. They have fixed my room up neat and nice in my absence, tinted the walls and carpeted the floor, and it is nice and comfortable and cozy here. The weather is still showery.

Mar. 6. Thursday. A very rainy morning and a showery day. Roland came in to see me. Have written to Horace and Ada.

1884. Mar. 7. Friday. A rainy day. Ida came home for the first time since Susie's birth. I have written to Willie.

Mar. 8. Saturday. A very rainy and windy day. I received a letter from Willie and a postal from Ada and Mr. C. This last had been a week on the road. Have written to Mrs. Gray.

Mar. 9. Sabbath. The day was so stormy that I could not think of going to meeting, not feeling well. I told Ida I would take care of little baby, so she could go, but baby could not be taken out in such a stormy day, so neither of us could go. There were very heavy showers of rain and hail this morning, accompanied by thunder, and the day was showery, so much so that Mr. Pascoe could not fill his appointment at Dexter. The water in the river has been very high for a long time and threatening to break the levers, especially Holman's, and the neighbors have been helping him to strengthen it for weeks past, but today it broke hopelessly and the water came nearly all over the bottom on our side and into the new orchard, so that the fruit trees are nearly half covered. On their way home from meeting Susie came in with Mrs. Vincent, who is now visiting her. She seems spry for one so old.

Mar. 10. Monday. Mrs. Vincent came to spend the day, also Ida and Mr. Pascoe, and they brought baby for the first time to our house. Mande Vincent came in to see his stepmother. I also received a call from Allen Athearn, who is in eather feeble health. I have written to Ada and received letters from her and Willard.

Mar. 11. Tuesday. Received a letter from Horace. He is now in the Tewksbury Alms house as Assistant Physician and Surgeon. He gave me a programmer of the way he spends his time there. Rising at 5 0'clock in the morning. nearly every moment of his time till bed time is occupied, in making tours of inspection into the different words, prescribing medicine for the patients, over using the nurses, &.c. He has left Harvard for awhile thinking