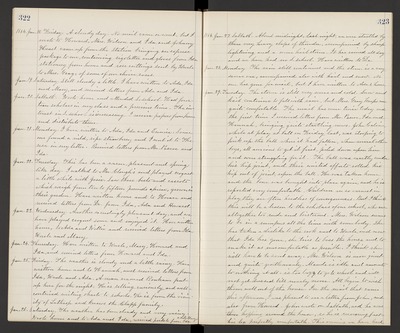 1884. Jan. 18. Friday. A cloudy day. No mail came or went, but I wrote to Howard, Mrs. Wilson and Ida, and Johnny Heart came up from the Station bringing an express package to me, containing rigoletter and gloves from Ida stationery from home and rose cuttings send by Uncle to Mrs. Gray, of some of our choice roses.

Jan. 19. Saturday. Still cloudy a little. I have written to Ada, Ida and Mary, and received letters from Ada and Ida.

Jan. 20. Sabbath. Wrote home and attended S. school. Had fourteen scholars in my class and a precious time. The interest in S. school is increasing. I receive papers from home and distribute them.

Jan. 21. Monday. I have written to Ada, Ida and Eunice. Some one found a wild, ripe strawberry and I sent it to Theresa in my letter. Received letters from Mr. Pascoe and Ida.

Jan. 22. Tuesday. This has been a warm, pleasant and spring - like day. I walked to Mr. Clough's and played croquet a little while with Josie, Saw their beets and carrots which weigh from ten to fifteen pounds apiece, grown in their garden. Have written home and to Horace and received letters from Dr. from Ida, Ada and Howard.

Jan. 23. Wednesday. Another exceedingly pleasant day, and we have played croquet some and enjoyed it. Have written home, to Ada and Willie and received letters from Ida, Uncle and Mary.

Jan. 25, Friday. The weather is cloudy and a little rainy. Have written home and to Hannah and received letters from Ida, Uncle and Ada. A man named Bonham put up here for the night. He is selling curiously and well - contrived writing charts to schools. He is from the vicinity of Lathrop and knows the Clapp family.

Jan. 26. Saturday. The weather has been cloudy and very rainy. Wrote home and to Ada and Ida, received postals from Ida and Mary.

1884. Jan. 27. Sabbath. About midnight, last night, we were startled by three very heavy claps of thunder, accompanied by sharp lightening and a severe hail storm. It has rained all day and we have had no S. school. Have written to Dr.

Jan. 28. Monday. The rain still continues and the storm is a very severe one, accompanied also with hail and snow. No one has gone for mail, but I have written to Ada & home.

Jan. 29. Tuesday. The storm is still very severe and cold. Snow and hail continue to fall with rain, but Mrs. Gray keeps me quite comfortable. The mail has come twice today and the first time I received letters from Mr. Pascoe, Ida and Hannah, bringing quite startling news. John Calvin, while at play at ball on Friday last, was stooping to pick up the ball where it had fallen, when several other boys, all anxious to get it first, piled down upon him and were struggling for it. The ball was exactly under his hip joint, and their united efforts rolled his hip out of joint, upon the ball. He was taken home and the bone was brought into place again, and he is reported very comfortable. Children are so earnest in play, they are often heedless of consequences. But I think this will be a lesson to the scholars of our school, who are altogether too rude and boisterous. Mrs. Wilson seems to be in a rumpus all the time with somebody. She has taken a dislike to the cook and to Uncle, and now that Ida has gone, she tries to boss the house and to make it as uncomfortable as possible. I think she will have to be sent away. Mr. Wilson is more quite and quite gentlemanly. Mande is idle and amounts to nothing at all - is too lazy to go to school and will not get dressed till nearly noon. All begin to wish them well out of the house. In the maid that came this afternoon, I was pleased to see a letter from John, and also from Howard. John wrote on Sabbath, and he was then hopping around the house, so he is recovering fast, his legs perfectly comfortable. This evening we have had