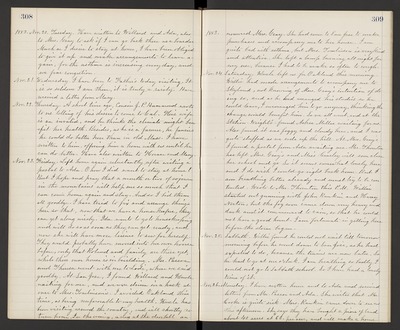 1883. Nov. 20. Tuesday. Have written to Willard and Ada, also to Mrs. Gray to ask if I am go back there as a boarder. Much as I desire to stay at home, I have been obliged to give it up and make arrangements to leave again, for the asthma is increasing every day, and we fear congestion.

Nov. 21. Wednesday. I have been to Father's today visiting. It is so seldom I am there, it is truly a rarity. Have received a letter from Mary.

Nov. 22. Thursday. A short time ago, Cousin J. P. Hammond wrote to us telling of his desire to come to Cal. His wife is an invalid, and he think the climate might benefit her health. Besides, as he is a farmer, he fancies he could do better here than in old Mass. I have written to him, offering him a home with us until he can do better. Have also written to Horace and Mary.

Nov. 23. Friday. Left home again reluctantly, after writing a postal to Ada. O how I did want to stay at home! But I hope and pray that a month or two of sojourn in the mountains will help me so much that I can come home again and stay. And so I bid them all goodbye. I have tried to fix and arrange things here so that, now that we have a housekeeper, they can get along nicely. Ida wants to go to housekeeping and will do so as soon as they can get ready, and now she will have more leisure to sew for herself. They would probably have moved into her own house before, only that Roland and family are there yet, while their own house is in building. Mr. Pascoe and Theresa went with me to Lodi, where we said goodby. At San Jose, I found Willard and Uncle waiting for me, and we were driven in a hack at once to Mrs. Tomlinson's. I avoided Oakland this time, as being unfavorable to my health. Uncle has been visiting around the country, and will shortly return home. In the evening, a ring at the doorbell announced

1883. Mrs. Gray. She had come to San Jose to make purchases and accompany me to her house. I am quite bad with asthma, but Mrs. Tomlinson is very kind and attentive. She left a lamp burning all night for my use. because I had to be awake so often to cough.

Nov. 24. Saturday. Uncle left us for Oakland this morning. Willie had made arrangements to accompany me to Skyland, not knowing of Mrs. Gray's intention of doing so, and as he had arranged his studies so he could leave, I encouraged him to go anyway, thinking the change would benefit him. So we all went, and at the Station - Weight's - found Asher Miller waiting for us. Also found it was foggy and cloudy here, and I was qute stuffed as we rode up the hill. At Mrs. Gray's I found a postal from Ada awaiting me. Mr. Thornton has left Mrs. Gray's and Miss Cearley will soon close her school and go So it seems somewhat lonely here and I do wish I could go right back home. But I am breathing better already and must try to be contented. Wrote to Mr. Thornton this P.M. Willie started out gunning with John Rankin and Harry Norton, but the fog soon came down very heavy and dark and it commenced to rain, so that he could not have a good hunt. I am fortunate in getting here before the storm began.

Nov. 25. Sabbath. Willie found he could not wait till tomorrow morning before he went down to San Jose, as he had expected to do, because the trains are now later. So he had to go at one o'clock. I am breathing so badly. I could not go to Sabbath school. So I have had a lonely time of it.

Nov. 26. Monday. I have written home and to Ada and received letters from Mr. Pascoe and Ada. She writes that Mr. Cooke is quite sick. Mrs. Rankin came down to see us this afternoon. She says they have bought a piece of land about 40 acres at $60. per acre, and will make a home.