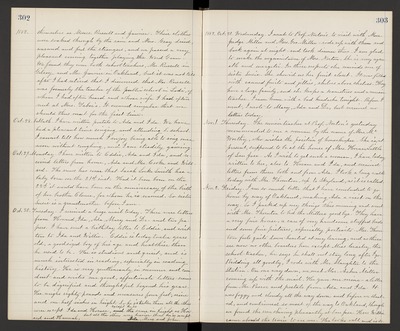 1883. themselves as Messes. Russell and Janvier. Their clothes were soaked through by the rain and Mrs. Gray dried, warmed and fed the strangers, and we passed a very pleasant evening together playing the Word Game. We found they were both school teachers, Mr. Russell in Gilroy and Mr. Janvier in Oakland, but it was not till after I had retired that I discovered that Mr. Russell was formerly the teacher of the public school in Lodi, of whom I had often heard and whose wife I had often met at Mrs. Tabor's. It seemed singular that we should thus meet for the first time.

Oct. 28. Sabbath. I have written postals to Ada and Ida. We have had a pleasant time singing and attending S. school. I cannot tell how much I enjoy being able to sing once more without coughing, and I am steadily gaining.

Oct. 29. Monday. I have written to Eddie, Ada and Ida, and received letters from home, Ada and Mr. Cooke and Willard. The news has come that Sarah Locke Smith has a baby born on the 21st inst. Had it been born on the 22d it would have been on the anniversary of the birth of her brother Elmer, for whom he is named. So sister Susie is a grandmother before I am.

Oct. 30. I received a large mail today. There were letters from Howard, Ida, Ada, Mary and Dr - and two papers. I have sent a birthday letter to Eddie, and written to Ida and Willie. Eddie is today twelve years old, a good sized boy of his age and healthier than he used to be. He is studious and quiet, and is much interested in reading, especially in reading history. He is very gentlemanly in manner and conduct and writes me good, affectionate letters seems to be dignified and thoughtful beyond his years. He weighs eighty pounds and measures four feet, nine and one-half inches in height. So she is taller than all the others were except Ida and Horace, except he is the same in height as Howard and Hannah, but all the others were heavier than he is except Mary and John.

1883. Oct. 31. Wednesday. I went to Prof. Norton's to visit with Mrs. Judge Miller and Mrs. Geo. Miller - rode up with them and back again at night and took dinner there. I am glad to make the acquaintance of Mrs. Norton. She is very agreeable and energetic. In these respects she reminds me of Sister Susie. She showed us her first closet. It was filled with canned fruits and jellies, shelves above shelves. They have a large family, and she keeps a seamstress and a music teacher. I came home with a bad headache tonight. Before I went, I wrote to Mary, Ada and Dr, but received no letters today.

Nov. 1. Thursday. The music teacher at Prof. Norton's yesterday recommended to me a woman by the name of Mrs. McWorthy, who wishes the position of housekeeper. She is, at present, supposed to be at the house of Mrs. Horace Little of San Jose. As I wish to get such a woman. I have today written to her, also to Horace and Ida, and received letters from them both and from Ada. I took a long walk today with Mr. Thornton, up to Skyland, as it is called.

Nov. 2. Friday. I am so much better that I have concluded to go home by way of Oakland, making Ada a visit on the way. So I packed up my things this morning and went with Mr. Thornton to bid the Millers goodbye. They have a very fine house, a case of very handsome stuffed birds and some fine pictures, especially portraits. Mr. Thornton feels quite down-hearted at my leaving, and as there are now no other boarders here except Miss Cearley, the school teacher, he says he shall not stay long after I go. Bidding all goodby, I rode with Mr. Slaughter to the Station. On our way down, we met Mr. Asher Miller coming up with the mail. He gave me mine, a letter from Mr. Pascoe and postals from Ada and Ida. It was foggy and cloudy all the way down and before we started, and continued so most of the way to Oakland, though we found the sun shining pleasantly at San Jose. Here Willie came aboard the train to see me. He looks well and is so.