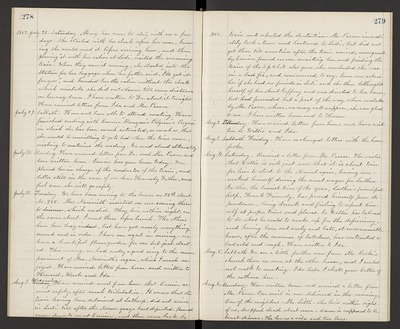 1883. July 28. Saturday. Mary has come to stay with us a few days. She started with her cloak upon her arm, knowing she would need it before arriving here, and then placing it with her valise at Lodi, waited the incoming train. When they saw it coming, she started into the Station for her baggage when her father said, "I'll get it for you", and handed her the valise without the cloak which mistake she did not observe till some distance on her way down. I have written to Dr. about it tonight. Have received letters from Ida and Mr. Pascoe.

July 29. Sabbath. Have not been able to attend meeting. Have finished reading with Eunice "Bunyan's Pilgrim's Progress" in which she has been much interested, so much so, that she would be unwilling to go to bed when the time came, wishing to continue the reading. We read aloud alternately.

July 30. Monday. Have received letters from Dr. and Mr. Pascoe and have written home. Eunice has gone home today. We placed her in charge of the conductor of the train, and better still in the care of our dear Heavenly Father, and feel sure she will go safely.

July 31. Tuesday. We have been moving to the house on 36th Street No. 925. Mrs. Naismith insisted on our coming there to dinner, which we did. They live, within sight, on the same street. I went there before lunch. The others have been busy indeed, but have got nearly everything moved and in order. I have one regret in moving - we leave a beautiful flower garden for one but just started. This evening, we had really a good sing to the accompaniment of Mrs. Naismith's organ, which I much enjoyed. Have received letters from home and written to Howard, Uncle and Ida.

Aug. 1. Wednesday. Have received word from home that Eunice arrived safely, after much tribulation. It seems that the train having been detained at Lathrop, did not arrive in Lodi till after the Narrow - guage had departed. Hannah came down to meet Eunice, and then came back by

1883. train and reported the dentention. Mr. Pascoe immediately took a team and hastened to Lodi, but did not get there till sometime after the train arrived, consequently, Eunice found no one awaiting her, and finding the train of the S.J. & S.N. also gone, she concluded she was in a bad fix, and commenced to cry. Some one asked her if she had no friends in Lodi and she then bethought herself of her Aunt Geffroy and was directed to her house, but had proceeded but a part of the way when overtaken by Mr. Pascoe, whom, we may well suppose, she was glad to see. I have written home and to Horace.

Aug. 2. Thursday. Have received letters from home and have written to Willie and Ida.

Aug. 3. Friday. Have exchanged letters with the home folks.

Aug. 4. Saturday. Received a letter from Mr. Pascoe. He writes that Willie is sick just now that it is about time for him to start to the Normal again, having overworked himself driving the meat wagon for Luther. In this, the busiest time of the year, Luther's principal help, Frank Finnerty, has proved himself poor dependence, being drunk and failing to report himself at proper times and places. So Willie has labored to do what he could to make up for the deficiency, and having been out early and late, at unseasonable hours, after the manner of butchers, has contracted a bad cold and cough. Have written to Ida.

Aug. 5. Sabbath. We are a little farther now from Mr. Cooke's church than we were at the other house, and I could not walk to meeting. I do hope I shall grow better of the asthma here.

Aug. 6. Monday. Have written home and received a letter from Mr. Pascoe. Our mail is now delivered in the morning. One of the neighbors - Mr. Little - who lives within sight of us, dropped dead about noon. Cause is supposed to be heart disease. He leaves a wife and two boys.