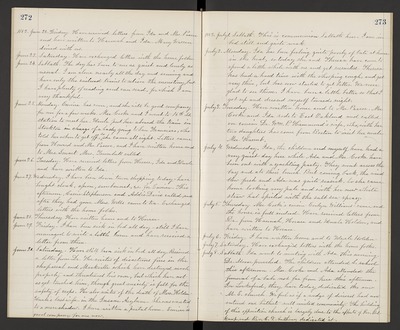 1883. June 22. Friday. Have received letters from Ida and Mr. Pascoe and have written to Hannah and Ida. Mary Warren dined with us.

June 23. Saturday. Have exchanged letters with the home folks.

June 24. Sabbath. The day has been to me as quiet and lonely as usual. I am alone nearly all the day and evening and have only the railroad trains to relive the monotony, but I have plenty of reading and can read, for which I am very thankful.

June 25. Monday. Eunice has come, and she will be good company for me for a few weeks. Mr. Cooke and I went to 16th St. station to meet her. Uncle put her aboard the train in Stockton in charge of a lady going to San Francisco, who told her when to get off, so she came all sight. Letters came from Howard and Mr. Pascoe, and I have written home and to Mrs. Smart. Mrs. Trumbull called.

June 26. Tuesday. Have received letters from Horace, Ida and Uncle and have written to Ida.

June 27. Wednesday. I have been down town shopping today - have bought cloak, apron, sunbonnet, &.c. for Eunice. This afternoon, Carrie Stephenson and Addie Davis called, and after they had gone Mrs. Wells came to tea. Exchanged letters with the home folks.

June 28. Thursday. Have written home and to Horace.

June 29. Friday. I have been sick in bed all day - still I have managed to write a little home and have received a letter from them.

June 30. Saturday. Have still been sick in bed all day. Received a letter from Dr. He writes of disastrous fires in the chaparral and Mackville which have destroyed much property and threatened his own, but which have not as yet touched him, though great anxiety is felt for the safety of crops. He also writes of the death of Mrs. Holden - Uncle's last wife - in the Insane Asylum. She was wasted to a mereshadow. I have written a postal home. Eunice is good company for me now.

1883. July 1. Sabbath. This is communion Sabbath here. I am in bed still and quite weak.

July 2. Monday. Ida has been feeling quite poorly of late at home in the heat, so today she and Theresa have come to spend a little while with us and get recruited. Theresa has had a hard time with the whooping cough, and got very thin, but has now started to get better. We were glad to see them. I have been a little better so that I got up and dressed myself towards night.

July 3. Tuesday. Have written home and to Mr. Pascoe. Mr. Cooke and Ida rode to East Oakland and called on cousin Dr. Wm. P. Hammond's wife, who, with her two daughters has come from Boston to visit her uncle Mr. Harrub.

July 4. Wednesday. Ida, the children and myself, have had a very quiet day here while Ada and Mr. Cooke have been out with a yachting party. They went across the bay and ate their lunch. But coming back, the wind blew fresh and Ada was quite seasick. So she came home looking very pale and with her new white straw hat spoiled with the salt sea spray.

July 5. Thursday. Mr. Cooke's cousin - Evelyn Williams - came and the house is full indeed. Have received letters from Dr. from Hannah, Horace and Uncle Holden, and have written to Horace.

July 6. Friday. I have written home and to Uncle Holden.

July 7. Saturday. Have exchanged letters with the home folks.

July 8. Sabbath. Ida went to meeting with Ada this morning. Dr. Mooar preached. The children attended S. school this afternoon. Mr. Cooke and Ada attended the funeral of a babe not far from here this afternoon. In Lockeford, they have today dedicated the new M. E. church. We feel as if a wedge of discord had now entered our hitherto well united community. The building of this opposition church is largely due to the efforts of Rev. Belknap, and Rev. C. V. Anthony dedicated it.