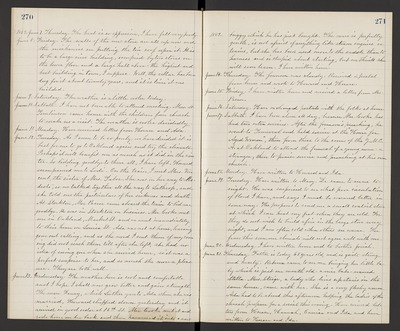 June 8. Friday. The walls of the new store are all up now and the mechanics are putting the tin roof upon it. It is to be a large nice building, occupied by two stores on the lower floor and a large hall above - the highest and best building in town, I suppose. Well, the cellar has been dug for it about twenty years, and it is time it was builded.

June 9. Saturday. The weather is a little cooler today.

June 10. Sabbath. I have not been able to attend meeting. Mrs. M. Tomlinson came home with the children from church to make us a visit. The weather is cooler decidedly.

June 11. Monday. Have received letters from Horace and Ada.

June 12. Tuesday. As I seem to be so poorly, we have decided it is best for me to go to Oakland again and try the climate. Perhaps it will benefit me as much as it did in the winter. So bidding goodbye to them all, I have left. Howard accompanied me to Lodi. On the train, I met Mrs. Vincent, the sister of Mrs. Tabor. She was in her way to Modesto, so we talked together all the way to Lathrop, and she told me the particulars of her sickness and death. At Stockton, Mr. Pascoe came aboard the train to bid me goodbye. He was in Stockton on business. Mr. Cooke met me in Oakland, Market St. and we went immediately to their home on Louisa St. Ada was not at home having gone out calling, and as the word I sent them of my coming did not reach them till after she left, she had no idea of seeing me when she arrived home so it was a perfect surprise to her, and so much the more a pleasure. They are both well.

June 13. Wednesday. The weather here is cool and comfortable and I hope I shall now grow better and gain strength. The mare Fanny, which Luther gave to Ada when she was married, Howard chipped down yesterday and it arrived in good order at 16th St. Mr. Cooke met it and rode home on her back and the harnessed it into a new

1883. buggy which he has just bought. The mare is perfectly gentle, is not afraid of anything like steam, engines or trains, but she has been used more to the saddle than to harness and is stupid about starting, but we think she will soon learn. I have written home.

June 14. Thursday. The forenoon was cloudy. Received a postal from home and wrote to Howard and Horace.

June 15. Friday. I have written home and received a letter from Mr. Pascoe.

June 16. Saturday. Have exchanged postals with the folks at home.

June 17. Sabbath. I have been alone all day, because Mr. Cooke has had two extra services. After the forenoon's preaching, he went to Temiscal and held service at the "Home for Aged Women", then from there to the rooms of the Y.M.C.A. at Oakland to attend the funeral of a young man - a stranger, then to praise service and preaching at his own church.

June 18. Monday. Have written to Howard and Ida.

June 19. Tuesday. Have written to Mary. Dr. came to seems tonight. He was surprised to see what poor circulation of blood I have, and says I must be warmed better in some way. He proposes to send me a small coal oil stove at which I can heat my feet when they are cold. For they do not wish to build a fire in the large stove every night, and I am often cold when others are warm. He fears this summer climate will not agree well with me.

June. 20. Wednesday. I have written home and to brother Josiah.

June 21. Thursday. Father is today 68 years old and is quite strong and hearty. Rebecca came to see me bringing her little baby which is just one month old - a nice babe - named Stella. Mrs. Steige, a lady who lives upstairs in the same house, came with her. She is a very fleshy woman. Ada had to be absent this afternoon helping the ladies of the church prepare for a social this evening. Have received letters from Horace, Hannah, Eunice and Ida and have written to Horace and Ida.