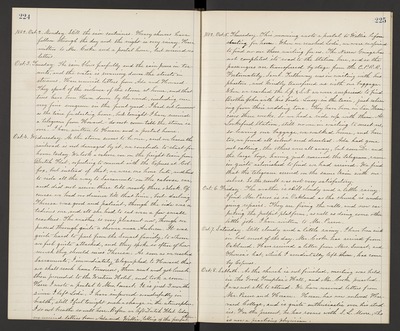 1882. Oct. 2. Monday. Still the rain continues. Heavy showers have fallen through the day and the night is very rainy. Have written to Mr. Cooke and a postal home, but received no letters.

Oct. 3. Tuesday. The rain blows fearfully and the rain pours in torrents, and the water is running down the streets in streams. Have received letters from Ada and Howard. They speak of the violence of the storm at home, and that trees have been blown down by the wind, including one very fine evergreen in the front yard. I had set tomorrow as the time for starting home, but tonight I have received a telegram from Howard - "do not come till the storm is over". I have written to Horace and a postal home.

Oct. 4. Wednesday. As the storm seems to be over, and we learn the railroad is not damaged by it, we conclude to start for home today. We took a caboose car on the freight train from Dutch Flat, expecting to connect with the Express at Colfox, but instead of that, we were one hour late, and had to ride all the way to Sacramento on the caboose car, and did not arrive there till nearly three o'clock. Of course we had no dinner till that time, but darling Theresa was good and patient, though the ride was a tedious one, and all she had to eat were a few small crackers. The weather is very pleasant now, though we passed through quite a shower near Auburn. It was quick hard to part from the Smart family, to whom we feel quite attached, and they spoke so often of how much they should miss Theresa. As soon as we reached Sacramento, I immediately telegraphed to Howard that we shall reach home tomorrow, then went and got lunch, then proceeded to the Western Hotel, and took a room. Here I wrote a postal to Mrs. Smart. It is just 3 months since I left Lodi. I have improved wonderfully in health, still I feel tonight such a change in the atmosphere, I do not breathe so well here. Before we left Dutch Flat today we received letters from Ada and Willie, telling of the fearful storm.

1882. Oct. 5. Thursday. This morning wrote a postal to Willie before starting for home. When we reached Lodi, we were surprised to find no one there waiting for us. The Narrow Guage has not completed its road to the Station here, and so the passengers are transferred by stage from the C.P.R.R. Fortunately, Saml. Tretheway was in waiting with his phaeton, and kindly transferred us with our baggage. When we reached the S.J. & S.N. we were surprised to find Brother John with his bride - Lucy - in the train, just returning from their wedding tour. They have been in San Francisco three weeks. So we had a ride up with them. At Lockeford Station, still no one in waiting to meet us, so leaving our baggage, we walked home, and here too, found all silent and deserted. Ada had gone out calling, the others were all away, but soon Dr. and the large boys, having just received the telegram, came in quite astonished to find we had arrived. We find that the telegram arrived on the same train with ourselves. So the result was not very satisfactory.

Oct. 6. Friday. The weather is still cloudy and a little rainy. I find Mr. Pascoe is in Oakland as the church is undergoing repairs. They are fixing the walls, and new carpeting the pulpit platform, as well as doing some other little jobs. I have written to Mr. Pascoe.

Oct. 7. Saturday. Still cloudy and a little rainy. I have been sick in bed most of the day. Mr. Cooke has arrived from Oakland. Have received a letter from Mrs. Smart, and Theresa's hat. which I accidentally left there, has come by Express.

Oct. 8. Sabbath. As the church is not finished, meeting was held in the Good Templar's Hall, and Mr. Cooke preached. I was not able to attend. We have received letters from Mr. Pascoe and Horace. Horace has now entered Harvard College, and is quite enthusiastic over his studies. For the present, he has rooms with S.L. Moore, who is now a practising physician.