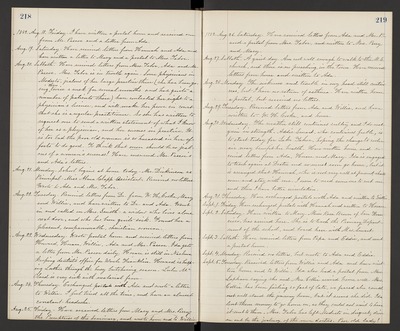 1882. Aug. 18. Friday. I have written a postal home and received one from Mr. Pascoe and a letter from Ada.

Aug. 19. Saturday. Have received letters from Hannah and Ada and have written a letter to Mary and a postal to Mrs. Tabor.

Aug. 20. Sabbath. Have received letters from Mrs. Tabor, Ada and Mr. Pascoe. Mrs. Tabor is in trouble again. Some physicians in Modesto, jealous of her large practice there (she has been going there twice a week for several months and has quite a number of patients there) have contested her right to a physician's license, and will make her prove in court that she is a regular practitioner. So she has written to request me to send a written statement of what I know of her as a physician, and her success in practice. It is too bad the poor old woman is so harassed in her efforts to do good. To think that men should be so jealous of a woman's success! Have answered Mr. Pascoe's and Ada's letters.

Aug. 22. Tuesday. Received letters from Dr. from W. H. Cooke, Mary and Willie, and have written to Dr. and Ada. Went in and called on Mrs. Smith - a widow who lives alone next door, and who has been quite sick. Found her a pleasant, companionable, christian woman.

Aug. 24. Thursday. Exchanged postals with Ada and wrote a letter to Willie. I feel tired all the time, and have an almost constant headache.

Aug. 25. Friday. Have received letters from Mary and Mrs. Percy the Preceptress of the Seminary, and wrote home and to Willie.

Aug. 27. Sabbath. A quick day. Am not well enough to walk to the M.E. church, and there is no preaching in the town. Have received letters from home and written to Ada.

Aug. 28. Monday. The sickness and trouble in my head still continues, but I have no return of asthma. Have written home a postal, but received no letters.

Aug. 29. Tuesday. Received letters from Ada and Willie, and have written to W.H. Cooke, and home.

Aug. 30. Wednesday. The weather still continues sultry and I do not gain in strenght. Addie Smart, who continues feeble, is to start today for Lake Tahoe, hoping the change to cooler air may benefit her health. Have written home and received letters from Ada, Horace and Mary. Ida is engaged to teach again at Dexter and so must soon go home, but it is arranged that Hannah, who is not very well at present, shall come and stay with me. I seem to need someone to rub me and then I have better circulation.

Aug. 31. Thursday. Have exchanged postals with Ada and written to Willie.

Sept. 1. Friday. Have exchanged postals with Hannah and written to Horace.

Sept. 2. Saturday. Have written to Mary. Miss Rosa Brown of San Francisco, has arrived here. She is to teach the Primary Department of the school, and board here with Mrs. Smart.

Sept. 3. Sabbath. Have received letters from Papa and Eddie, and sent a postal home.

Sept. 4. Monday. Received no letters, but wrote to Ada and Eddie.

Sept. 5. Tuesday. Received letters from Willie and Ada and have written home and to Willie. Ida also had a postal from Mrs. Lapham saying she and Mrs. Collie arrived home well. Mrs. Collie has been failing so fast of late, we feared she could not well stand the journey home, but it seems she did. Ida lent them money to go home on, as they could wait to have it sent to them. Mrs. Tabor has left Modesto in disgust, driven out by the jealousy of the men doctors. Poor old lady!