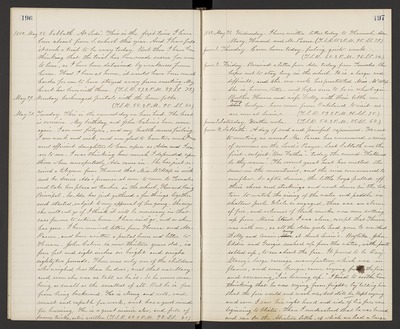 1882. May 28. Sabbath. At Lodi! This is the first time I have been absent from S. school this year. And I have felt it such a trial to be away today. But then I have been thinking that the trial has been made easier for me to bear, as I have been detained by weakness from home. Had I been at home, it would have been much harder for me to have stayed away from meeting. My heart has been with them. (T.S.R. 57. 2 P.M. 89. S.S. 75.)

May 30. Tuesday. This is the warmest day we have had. The heat is excessive. My birthday and John Calvin's have come again. I am now fortysix, and my health seems failing. I am weak and sick, and am glad to have two such good and efficient daughters to lean upon as Ada and Ida are to me. I was thinking how much I depended upon them when unexpectedly Ada came in. She has just received a telegram from Howard that Miss McAllep is sick and desires Ada's presence at once to come to Tomales and take her place as teacher in the school, Howard being Principal. So Ada has just gathered a few things together and started, subject to my approval of her going. She says she will not go if I think it will be necessary in that case for me to return home. I have said "go", and so she has gone. I have received letters from Horace and Mr. Pascoe, and have written a postal home and letter to Horace. John Calvin is now thirteen years old, is four feet and eight inches in height and weighs eightytwo pounds. There was only one of the children who weighed less than he does, and that was Mary - and even she was as tall as he is. So he comes near being as small as the smallest of all. But he is far from being backward. He is strong and well, and smart and capable for work, and has a good mind for learning. He is a great mimic also, and full of funny tricks, active & restless. (T.S.R. 60. 2 P.M. 98. S.S. 81.)

June 2. Friday. Received a letter from Ada today from Tomales. She hopes not to stay long in the school. It is a large and difficult, and the over-work has prostrated Miss McAllep. She is, however, better, and hopes soon to be in school again. Brother Horace and wife Dolly with their little one - Amy Evelyn - Have come from Oakland to visit us. are now at Susie's. (T.S.R. 54. 2 P.M. 85. S.S. 68.)

June 4. Sabbath. A day of sad and painful experiences. We went to meeting as usual. Mr. Pascoe has commenced a series of sermons on the Lord's Prayer. Last Sabbath was the first - subject - "Our Father" - today the second - "Hallowed by thy name". The recent great heat has melted the snow in the mountains, and the river commenced to overflow. So after dinner, the little boys pulled off their shoes and stockings and went down in the bottom to watch the rising of the water and paddle in shallow pools. While so engaged, there was an alarm of fire, and volumes of black smoke were seen rolling up from Main Street. I was alone, except that Theresa was with me, as all the older girls had gone to see Aunt Dolly and Cousin Amy at Aunt Susie's. Boy-like, John, Eddie and Georgie rushed up from the water, with pants rolled up, to see about the fire. It proved to be Benj. Stacey's large carriage manufactory which was in flames, and soon Georgie came crying from the fire and screaming, "I'm burning up." I tried to soothe him thinking that he was crying from fright, by telling him that the fire would not reach us, but still he kept crying and soon I saw his right hand and side of his face were beginning to blister. Then I understood that he was burned and ran for the Abietene bottle, of which we had a large