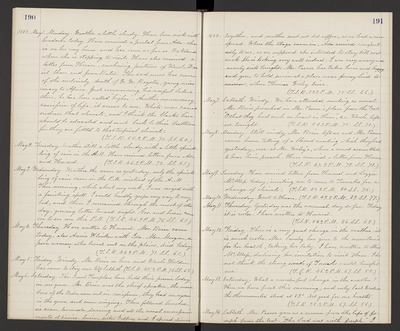 1882. May 1. Monday. Weather a little cloudy. Have been sick with headache today. Have received a postal from Ada - she is on her way home and has come as far as Oakland where she is stopping to visit. Have also received a letter from Horace, enclosing pictures of Uncle Daniel Shaw and Joan Bates. The sad news has come of the untimely death of W.W. Bagster, young missionary to Africa. Just commencing his useful labors there, he has been called "higher". Another unnecessary sacrifice of life, it seems to me. White men cames endure that climate, and I think the blacks here should be educated and sent back to their brethren for they are fitted to that tropical climate. (T.S.R. 55. 2 P.M. 70. S.S. 60.)

May 3. Wednesday. Weather the same as yesterday, only the sprinkling of rain came in the P.M. instead of the A.M. This morning, while about my work, I was seized with a fainting spell. I could hardly grope my way to my bed, and there I remained through the most of the day, growing better toward night. Geo. and Susie came in to see me this P.M. (T.S.R. 46. 2 P.M. 75. S.S. 61.)

May 6. Saturday. The Good Templars have held their picnic today in our grove. Mr. Brier was the chief speaker, the members of the Order were out in uniform, they had an organ in the grove and some singing. Then followed lunches, ice cream, lemonade, dancing and all the usual accompaniments of picnics. Susie, sister Geffroy and I spend dinner

1882. together, and mother sent out hot coffee, so we had a nice spread. When the stage came in, Ada arrived unexpectedly to us, as we supposed she intended to stay till next week. She is looking very well indeed. I am very weary and nearly sick tonight. Mr. Pascoe has taken horse and buggy and gone to hold service at a place near Jenny Lind tomorrow, where Thomas Wiley lives. (T.S.R. 52. 2 P.M. 75. S.S. 66.)

May 12. Friday. There is a very great change in the weather - it is much cooler. Mrs. Sandoz has gone to the mountains for her health, taking her baby. I have written to Miss McAllep, declining her invitation to visit them. I do not think the strong winds of Tomales would benefit me. (T.S.R. 45. 2 P.M. 67. S.S. 55.)

May 14. Sabbath. Mr. Pascoe gave us a sermon from the life of Joseph from the text - "The Lord was with Joseph." I