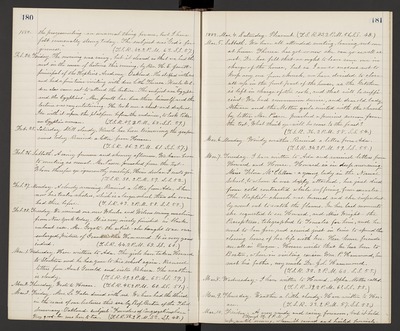 Feb. 24. Friday. The morning was rainy, but it cleared so that we had the next in the course of lectures this evening, by Rev. H.E. Jewett - principal of the Hopkins Academy - Oakland. He stopped with us and had a fine time visiting with dear little Theresa. Uncle Holder also came out to attend the lecture. The subject was "Egypt and the Egyptians." Mr. Jewett has been there himself and the lecture was very entertaining. He took over a sheet and draped Ida with it upon the platform before the audience, to look like an Egyptian woman. (T.S.R. 49. 2 P.M. 62. S.S. 59.)

Feb. 28. Tuesday. He received our new Wheeler and Wilson sewing machine from New York today. It is very nicely finished in black walnut case. Mr. Goyote - the artist - also brought to us our enlarged picture of Grandmother Hammond. It is very good indeed. (T.S.R. 44. 2 P.M. 63. S.S. 60.)

Mar. 1. Wednesday. Have written to Ada. The girls have taken Howard to Stockton and he has gone to his school again. Received letters from Aunt Gerould and sister Rebecca. The weather is cloudy. (T.S.R. 49. 2 P.M. 65. S.S. 59.)

Mar. 5. Sabbath. We have all attended meeting, leaving not one at home. Theresa has got so now she can go as well as not. Dr. has felt that we ought to leave some one in charge of the house, but as I am so anxious not to keep any one from church, we have decided to close all up in the front part of the house, as the kitchen is left in charge of the cook, and that will be sufficient. We had communion service, and dear old lady Athearn and the Motter girls united with the church by letter. Mr. Pascoe preached a precious sermon from the text, "What think ye - will he come to the feast?" (T.S.R. 36. 2 P.M. 58. S.S. 54.)

Mar. 7. Tuesday. I have written to Ada and received letters from Howard and Horace. Howard is in deep mourning. Miss Flora McClellan - a young lady in the Normal School, to whom he was deeply attached, has just died from cold contracted while suffering from measles. The Baptist church was burned and she impudently went out to watch the flames. In her last moments she requested to see Howard, and Miss Wright - the Preceptress, telegraphed to Tomales for him, and he went to San Jose, and arrived just in time to spend the closing hours of her life with her. Her home friends are all in Oregon. Horace writes that he has been to Boston, where in visiting cousin Wm. P. Hammond, he met his father, my uncle Dr. J.S. Hammond. (T.S.R. 32. 2 P.M. 60. S.S. 55.)

Mar. 10. Friday. A very windy and rainy forenoon, but it held up through the P.M. until evening, when it rained and hailed furiously -