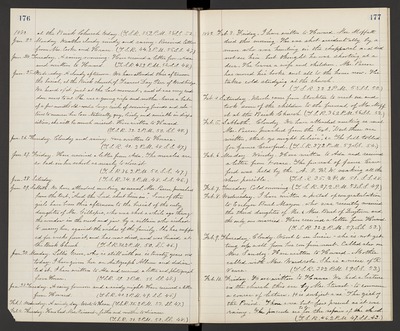 Jan. 25. Wednesday. A cloudy afternoon. We have attended this afternoon the burial, at the Brick church of Frances Day Parr of Woodbridge. We heard of it just at the last moment, and it was very sudden news to us. She was a young wife and mother - leaves a babe of a few months old - and a large circle of sorrowing friends and relatives to mourn her loss. Naturally gay, lively and amiable in disposition, she will be much missed. Have written to Howard. (T.S.R. 32. 2 P.M. 50. S.S. 48.)

Jan. 29. Sabbath. We have attended meeting as usual. Mr. Pascoe preached from the text, "And the Lord shut him in". Some of the girls have been this afternoon to the burial of the only daughter of Mr. Gillespie, who was shot a while ago through the window in the neck and jaw by a villain who wished to marry her, against the wishes of the family. She has suffered for weeks from it, and has now died, and was buried at the Brick Church. (T.S.R. 30. 2 P.M. 50. S.S. 46.)

1882. Feb. 3. Friday. I have written to Howard. Mr. Moffat died this morning. He was shot accidentally by a man who was hunting in the chapparal and did not see him but thought he was shooting at a deer. He leaves a wife and children. Mr. Pascoe has moved his books and all to the house now. He takes cold studying at the church. (T.S.R. 32. 2 P.M. 55. S.S. 50.)

Feb. 8. Wednesday. I have written a postal of congratulation to Evelyn Burt Mayon, who was recently married the third daughter of Mr. & Mrs. Burt of Drytown and the only one married. Have received a letter from Howard. (T.S.R. 32. 2 P.M. 57. S.S. 53.)