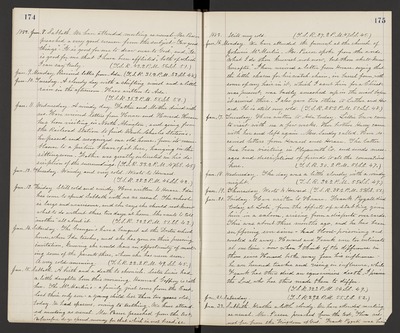 Jan. 11. Wednesday. A windy day. Father and Mother dined with us. Have received letters from Horace and Howard. Horace has been visiting in North Abington, and going from the Railroad Station to find Uncle Charles Stetson's, he passed and recognized our old home, from its resemblance to a picture I have of it here, hanging in the sitting room. Father was greatly interested in his description of the surroundings. (T.S.R. 33. 2 P.M. 47. S.S. 45.)

Jan. 14. Saturday. The Granger's have a banquet at the Dexter school house, where Ida teaches, and she has gone on their pressing invitation, knowing she would have an opportunity of meeting some of the parents there, whom she has never seen. A very cold morning. (T.S.R. 22. 2 P.M. 49. S.S. 45.)

Jan. 15. Sabbath. A birth and a death to chronicle. Sister Susie had a little daughter born this morning. Hannah Geffroy is with her. The McMartin's - a family just come from the East, lost their only son - a young child less than two years old, today. He had spasms, owing to teething. We have attended meeting as usual. Mr. Pascoe preached from the text, "Wherefore do ye spend money for that which is not bread," &.c.

Jan. 16. Monday. We have attended the funeral at the church of Johnnie McMartin. Mr. Pascoe spoke from the words, "What I do thou knowest not now, but thou shalt know hereafter." I have received a letter from Horace saying that the little charm for his watch-chain, in barrel form, with some of my hair in it, which I sent him for a Christmas present, was badly smashed up in the mail before it arrived there. I also gave two others to Luther and Howard. It is still very cold. (T.S.R. 25. 2 P.M. 50. S.S. 48.)

Jan. 17. Tuesday. Have written to Ada today. Lillie Greve came to visit with us a few weeks. Her brother Harry came with her and left again. Mrs. Sandoz called. Have received letters from Howard and Horace. The latter has been visiting in Plymouth Co. and sends messages and descriptions of friends to all the connections here. (T.S.R. 30. 2 P.M. 51. S.S. 47.)

Jan. 20. Friday. Have written to Horace. Frank Pygall died today at Lodi, from the effects of a stabbing given him in a saloon, arising from a dispute over cards. This was about three months ago, and he has been suffering ever since - had blood-poisoning and wasted all away. Howard and Frank were too intimate at one time - now when I think of the difference in them since Howard broke away from his influence - he an honored teacher and rising in influence, while Frank has thus died on ignominious death, I praise the Lord who has thus made them to differ. (T.S.R. 32. 2 P.M. 54. S.S. 49.)

Jan. 22. Sabbath. Weather a little cloudy. We have attended meeting as usual. Mr. Pascoe preached from the text, "Then ask not far from the kingdom of God." Frank Pygall was [?]