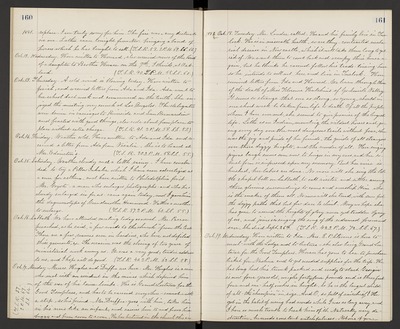 Oct. 13. Thursday. A cold wind is blowing today. Have written to Josiah, and received letters from Ada and Ida. Ada went to her school last week and commenced on the tenth. She enjoyed the meeting very much at Los Angelos. The delegates were driven in carriages to Riverside and San Bernardino and feasted with good things, also rode about from place to place without extra charge. (T.S.R. 41. 2 P.M. 58. S.S. 53.)

Oct. 15. Saturday. Weather cloudy and a little rainy. I have concluded to try a Pillow Inhaler which I have seen advertized as a cure for asthma, and have written to Philadelphia for it. Mr. Goyote - a man who enlarges photographs - and who has already enlarged six for us - came again today, and I gave him the daguerreotype of Grandmother Hammond - Father's mother - to enlarge. (T.S.R. 37. 2 P.M. 60. S.S. 55.)

Oct. 16. Sabbath. We have attended meeting today as usual. Mr. Pascoe preached, as he said, "a few words to the church" from the text "There are a few names even in Sardius, who have not defiled their garments," &.c. The occasion was the closing of two years of ministerial work among us. It was a very good, tender address to us, and I hope will do good. (T.S.R. 40. 2 P.M. 62. S.S. 58.)

Oct. 17. Monday. Messrs. Hughes and Duffie are here. Mr. Hughes is a man who met with an accident in the mines which deprived him of the use of his lower limbs. He is Grand Lecturer for the Good Templars, and has to be carried every where - cannot walk a step, so his friend - Mr. Duffie - goes with him, takes him in his arms like an infant, and carries him to and from his buggy and from room to room. He has lectured in the church this eve. (T.S.R. 37. 2 P.M. 67. S.S. 64.)

1881. Oct. 18. Tuesday. Mr. Lander called. He and his family live in Turlock. He is in miserable health, so are they - contracted malarial disease in Newcastle, which it will take them long to get rid of. We want them to come back and occupy their house again, but he thinks he cannot follow his trade-tinning here so he intends to sell out here and live in Turlock. Have received letters from Ida and Howard. We learn through them of the death of Miss Florence Hutchins of Yo-Semite Valley. It seems so strange that one so strong, so young, should in one short week be taken from life to death. Of all the people whom I have ever met, she seemed to give promise of the longest life. Lithe as an Indian, mounting the wildest horses and going every day over the most dangerous trails without fear, she was the joy and pride of her friends, the guide of all strangers over those dizzy heights, and the wonder of all. Her ringing joyous laugh seems eveb now to linger in my ears, and her robust form if impressed upon my memory. But her voice is hushed, her labors are done. No more will she sing the little chapel bell on Sabbath, to call visitor and settle among those glorious surroundings to come and worship Him who is the maker of them all. No more will she tread, with sure foot the dizzy paths that but few dare to climb. May we hope she has gone to ascend the heights of glory never yet trodden by any of us, and joins in singing the song of the redeemed forever and ever. She died Sept. 26th. (T.S.R. 42. 2 P.M. 72. S.S. 67.)

Oct. 19. Wednesday. Have written to Ida. Mrs. E.P. Stevens is here to meet with the Lodge and to lecture - she also being Grand Lecturer for the Good Templars. Horace has gone to Sac. to purchase ticket for Nashua and to get needed supplies for the trip. He has long had his trunk packed and ready to start. Georgie is now four years old, weighs fortyfour pounds and is three feet four and one-half inches in height. So he is the largest child of all the "champion" in size. And O, so full of mischief! He got in the habit of using bad words while I was so long away, and I have so much trouble to break him of it. Naturally very destructive, he needs constant watchfulness. Not one of your