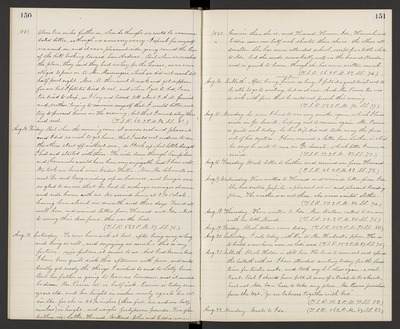 1881. place two miles farther on, where he thought we could be accommodated better, so though we were very weary - I speak for myself - we went on, and it was a pleasant ride, going round the brow of the hill looking toward San Andreas. But when we reached the place, they said they had no hay for the horses, so we were obliged to press on to Mr. Messenger's, which we did not reach till half past eight. Mrs. M. there went to work and got supper for us, but I felt too tired to eat, and when I got to bed, I was too tired to sleep, so I lay and tossed till about 2. A.M. feverish and restless, trying to convince myself that I would better not try to proceed home in the morning, but that I must stay there and rest. (T.S.R. 62. 2 P.M. 92. S.S. 81.)

Aug. 12. Friday. But when the morning came, it was so cool and pleasant and I did so wish to get home, that I could not endure to see the others start off without me, so I took up what little strength I had and started with them. The ride down through Campo Seco and Camanche would have been very enjoyable, had I been well. We took our lunch near Widow Hill's. Near Mr. Clements', we met Dr. and Georgie riding up on business, and Georgie was so glad to see me, that he had to exchange carriages at once and ride home with us. We arrived home at 2 1/4 o'clock, having been absent one month and three days. Found all well here, and received letters from Howard and Ida. Next to seeing their dear faces, this was the best. (T.S.R 56. 2 P.M. 87. S.S. 76.)

Aug. 13. Saturday. To come home sick at last, after being away so long and being so well, and enjoying so much - this is my fortune - mis-fortune, it seems to us - but God knows best. I have been quite sick this afternoon with fever, and could hardly get ready the things I wished to send to Lilly Greve. But her father is going to leave us tomorrow, and it must be done. Mr. Pascoe too, is half sick. Eunice is today seven years old, and her height in inches nearly equals her wt. in lbs. for she is 46 1/2 inches (three feet, ten and one-half inches) in height, and weighs fortyseven pounds. Five of her brothers, viz: Luther, Howard, Willard, John and Eddie were

1881. heavier than she is, and Howard, Horace, Ida, Hannah and Eddie were one-half inch shorter than she is - the others all smaller. She has never attended school, except for a little while to Ada, but she reads remarkably well in the Second Reader, and is quick to learn, though she has never written much. (T.S.R. 56. 2 P.M. 83. S.S. 74.)

Aug. 15. Monday. So soon I had to use my smoke again, which I laid aside in Yo-Semite, hoping not to resume again. Mr. Pascoe is quite sick today. So his trip did not take away the fever out of his system. I have received a letter from Luther, in which he says he wrote to me in Yo-Semite, which letter I never received. (T.S.R. 53. 2 P.M. 83. S.S. 73.)

Aug. 17. Wednesday. Have written to Howard and received letter from Ida. She has sixteen pupils - a pleasant school and pleasant boarding place. The weather is so cool there, she wears winter clothes. (T.S.R. 50. 2 P.M. 84. S.S. 74.)

Aug. 21. Sabbath. Uncle Holden is still here. He loves to come out and spend the Sabbath with us. I have attended meeting today for the first time for twelve weeks, and took my S.S. class again - a real treat. But I should have felt it more of a trial to be absent, had not Ada been here to take my place. Mr. Pascoe preached from the text, "Ye are laborers together with God." (T.S.R. 56. 2 P.M. 91. S.S. 83.)