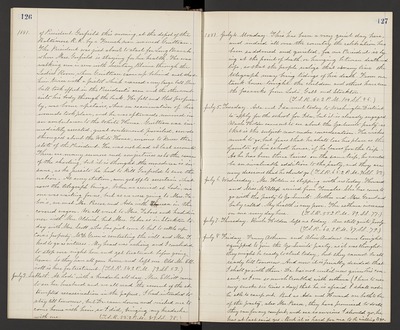 1881. of President Garfield this morning, at the depot of the Baltimore R.R. by a French man named Guitteau. The President was just about to start for Long Branch, where Mrs. Garfield is staying for her health. He was walking arm in arm with Secretary Blaine through the Ladies' Room, when Guitteau came up behind and shot him twice with a pistol which carried a very large ball. One ball took effect in the President's arm and other went into his body through the back. He fell and bled profusely, was home upstairs, where an examination of his wounds took place, and he was afterwards removed in an ambulance to the White House. Guitteau was immediately arrested, great excitement prevailed, crowds stronged about the White House, anxious to know the state of the President. He was not dead at last accounts. There are many rumors and conjectures as to the cause of the shooting, but it is thought the murderer is insane, as he persist he had to kill Garfield to save the nation. At every station, men got off the ascertain what news the telegraph brings. When we arrive at Lodi, no one was waiting for us, but as we were going to Mrs. Tabor's, we met Mr. Pascoe and Ada with Theresa in the covered wagon. We all went to Mrs. Tabor's and had dinner with Mrs. Aldrich, but Mrs. Tabor is in Stockton today with Mrs. Scott, who has just come to Cal. to settle up Cora's property. McD. Green is contesting the will and Mr. T. had to go as witness. My head was aching and I concluded to stop over night here and get treatment before going home. So they have all gone home and left me. Old Mr. Elliott is hue for treatment. (T.S.R. 54. 2 P.M. 79. S.S. 63.)

July 3. Sabbath. At Lodi with a headache all day. Mrs. Elliott came to see her husband and we all read the account of the attempted assassination in the papers. I had intended to stay till tomorrow, but Dr. came down and wished me to come home with him, so I did, bringing my headache with me. (T.S.R. 55. 2 P.M. 89. S.S. 78.)

1881. July 4. Monday. This has been a very quiet day here, and indeed all over the country the celebration has been saddened and quieted, for our President is lying at the point of death, or hanging between death and life, so that the people realize that any time the telegraph may bring tidings of his death. From our tank-house - tonight the children and others have seen the fireworks from Lodi Galt and Stockton. (T.S.R. 60. 2 P.M. 100. S.S. 86.)

July 5. Tuesday. Ada and Ida today to Washington District to apply for the school for Ida, but it is already engaged. Uncle Holden came out to see about the Yo-Semite party as that is the subject now under consideration. He wishes much to go, but fears that he shall lose his place as the Janitor of his school house, if he leaves for the trip. As he has been three times on the same trip, he would be an invaluable addition to the party, and they are very desirous that he should go. (T.S.R. 65. 2 P.M. 96. S.S. 83.)

July 6. Wednesday. Mr. Holden is stopping with us today. Howard and Miss McAllep arrived from Tomales. She has come to go with the party to Yo-Semite. Mother and Mrs. Grant and baby called. My health is very poor. The asthma increases on me every day here. (T.S.R. 55. 2 P.M. 89. S.S. 77.)

July 8. Friday. Fanny Athearn and Alice Andrew came tonight equipped to join the Yo-Semite party, as it was thought they might be ready to start today, but they cannot be all ready till tomorrow. And now it is finally decided that I shall go with them. Dr. has not until now given his consent, as I am so much troubled with asthma (I have to use my smoke six time a day) that he is afraid I shall not be able to camp out. But as Ada and Howard are both to be of the party, also Mr. Pascoe, they have promised to do all they can for my comfort, and are so anxious I should go, he has at last said yes. But it is hard for me to be willing to go.