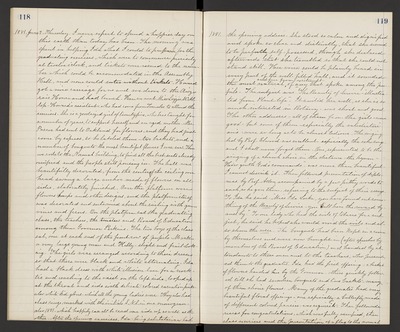 1881. June 2. Thursday. I never expect to spend a happier day on this earth than today has been. The morning was spent in helping Ida what I could to prepare for the graduating exercises, which were to commence precisely at twelve o'clock, and tickets were issued to the number which could be accommodated in the Assembly Hall, and none could enter without tickets. Howard got a nice carriage for us and we drove to the Auzerais House and had lunch. Here we met Miss Lizzie, M. Allep - Howard's assistant - who had come from Tomales to attend the exercises. She is a goodsized girl of twentyfive, who has taught for a number of years, to support herself and an aged mother. Mr. Pascoe had sent to Oakland for flowers, and they had just come by express, so he labeled them - two baskets, and a number of bouquets - the most beautiful flowers I ever saw. Then we rode to the Normal building, to find all the best seats already occupied and the people still pouring in. The hall was beautifully decorated, from the center of the ceiling over head swung a large anchor made of flowers on all sides, elaborately finished. Over the platform were flowers harps and other designs, and the platform itself was decorated and entwined about the railing with green vines and ferns. On the platform sat the graduating class, the teachers, the trustees and Board of Education among them Governor Perkins. The two boys of the class sat, one at each end of the front row of pupils. Martin a very large young man and Kelly - slight and frail looking. The girls were arranged according to their dresses so that there were black and white alternating. Ida had a black dress with white illusion lace for a necktie and reaching to the waist on the left side, looped up at the throat and side with delicate colored carnation pinks - also white kid gloves - which all the young ladies wore. They also had class rings marked with the initials. S.N.S in one monogram - also 1881 - which happily case all be read one side up as well as the other. After the opening exercises, Ida being salutatorian had

1881. the opening address. She stood so calm and dignified and spoke so clear and distinctly, that she seemed to be perfectly self-possessed, though she declared afterwards that she trembled so that she could not stand still. Her voice could be plainly heard in every part of the well-filled hall, and it sounded the most natural and free from excitement of any that spoke among the pupils. The subject was "The Beauty of Service - illustrated from Plant life". It suited her well, as she is so much interested in Botany - was short and good. The other addresses - all of them from the girls - were good - but some of them especially the valedictorian's were so long as to be almost tedious. The singing led by Prof. Elwood - was excellent especially the echo songs and I shall never forget them. One represented to be the singing of a church choir in the distance - the hymn - "How gentle God's commands" - was more than beautiful - I cannot describe it. Then followed presentation of diplomas by Prof. Allen, accompanied by a few pithy words to each, as he gave them, referring to the subject of their essays. To Ida he said. "Miss Ida Locke, you have found out something of the Beauty of Service - you will have the reward by and by." To one lady who had the evils of tobacco for a subject, he said he hoped she would avoid the evils and also shun the user. The bouquets had be kept in a room by themselves and were now brought in (after speeches by member of the Board of Education) and handed by attendants to these men and to the teachers, who presented them to the graduates. Ida had the first offering - a basket of flowers handed her by the Governor - others quickly followed till she had seventeen bouquets and two baskets - many of them choice flowers. Many of the graduates had very beautiful floral offerings - one especially - a butterfly made of different colored pansies- was exquisite. Then followed a recess for congratulations, which was fully occupied, then class exercises and the presentation of the flag to the normal