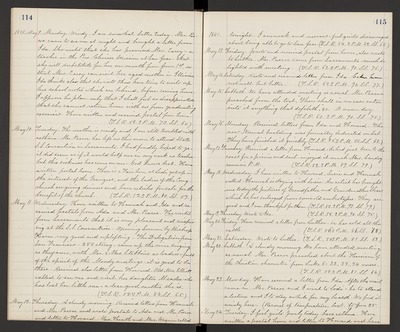 1881. May 9. Monday. Windy. I am somewhat better today. Mr. Pascoe came to see me at night and brought a letter from Ida. She writes that she has promised Mrs. Carey - a teacher in the Pres. Chinese Mission at San Jose - that she will substitute for her one month from June 1st, so that Mrs. Carey can visit her aged mother in Illinois. Ida thinks that she will thus have time to write up her school notes which are behind, before coming home. I approve his plan, only that I shall feel so disappointed that she cannot return home with us from graduating exercises. Have written and received postal from home. (T.S.R. 58. 2 P.M. 73. S.S. 60.)

May 10. Tuesday. The weather is windy and I am still troubled with asthma. Mr. Pascoe has left us this morn to attend State S.S. Convention in Sacramento. I had fondly hoped to go - it did seem as if it would help me in my work as teacher but this sickness has come on me - God knows best. Have written postal home. There is a Fair here at Lodi got up in the interest of the Grangers, and the ladies of the Cong. church are giving dinners and have articles for sale for the benefit of the church. (T.S.R. 52. 2 P.M. 80. S.S. 57.)

May 11. Wednesday. Have written to Hannah and Ida and received postals from Ada and Mr. Pascoe. He writes from Sacramento that it is very pleasant and inspiring at the S.S. Convention - Opening Sermon by Bishop Haven very good and uplifting. The Delegation from San Francisco - 250 strong - came up the river singing as they came, with Mr. & Mrs. Stebbins as leaders - full of the spirit of the Moody meetings - it is good to be there. Received also letter from Howard. Old Mrs. Elliott called to see me and visit her daughter Meader who has lost her little one - a dear good mother she is. (T.S.R. 58. 2 P.M. 84. S.S. 65.)

May 18. Wednesday. I have written to Howard. Susie and Hannah called - Hannah is staying with Susie. An artist has brought me today the pictures of Grandfather and Grandmother Show which he has enlarged from some old ambrotypes. They are good and I am thankful for them. (T.S.R. 50. 2 P.M. 93. S.S. 79.)

May 23. Monday. Have received a letter from Ida. After the mail came in, Mr. Pascoe and I went to Lodi - he to attend a lecture and I to stay awhile for my health. We find it windy here. (Record of temperature lost) to June 25.

May 24. Tuesday. I feel quite poorly today - have asthma. Have written a postal home and letter to Howard and have