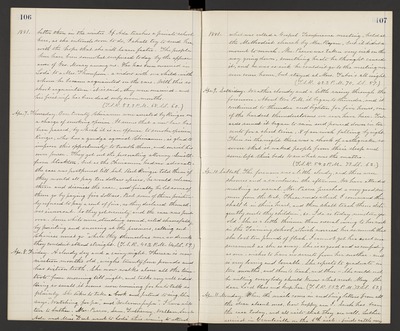 1881. better than in the winter. If Ada teaches a private school here, as she intends soon to do, I shall try to send her, with the hope that she will learn faster. The people here have been somewhat surprised today by the appearance of Geo. Mowry among us. He has been married in Lodi to a Mrs. Thompson - a widow with one child - with whom he became acquainted on the cars. With this so short acquaintance - it is said - they were married - and his first wife has been dead only seven months. (T.S.R. 53. 2 P.M. 68. S.S. 60.)

Apr. 7. Thursday. Over twenty Chinamen were arrested by Ringer on a charge of smoking opium. It seems that a new law has been passed, by which it is an offence to smoke opium. Ringer, who has a grudge against Chinamen, is glad to improve this opportunity to trouble them, and enrich his own purse. They got out the prosecuting attorney- Smith - from Stockton, but as the Chinamen had no advocate - the case was postponed till Sat. But Ringer told them if they would all pray ten dollars a piece, he would release them and dismiss the case, and finally he let some of them go by paying five dollars. But some of them positively refused to pay a cent of five, as they declared themselves innocent. So they got security, and the case was put over. Some white men, standing sound acted shamefully by pointing and sneering at the prisoners, calling out "Chinese must go" while they themselves were so drunk they couldn't stand straight. (T.S.R. 40. 2 P.M. 64. S.S. 59.)

Apr. 8. Friday. A cloudy day and a rainy night. Theresa is now nineteen months old, weighs twentyfour pounds and has sixteen teeth. She now walks alone all the time - trots from morning till night, and talks very well indeed. Being so small, it seems more cunning for her to talk so plainly. She likes to take a book and pretend to sing. She says, "Watching for pa", and "Welcome papa". I have written to Luther. Mr. Pascoe, Sam, Tretheway, Wallace, Sarah, Ada and Miss Dart went to Lodi this evening to attend

1881. what was called a Gospel Temperance meeting, held at the Methodist church by Mr. Ryan, but it didn't amount to much. Mr. Pascoe was taken very sick on the way going down, something he ate he thought caused it, and he was so sick he couldn't go to meeting nor even come home, but stayed at Mrs. Tabor's all night. (T.S.R. 42. 2 P.M. 70. S.S. 57.)

Apr. 9. Saturday. Weather cloudy and a little rainy through the forenoon. About two P.M. it began to thunder, and it continued to thunder and lighten for five hours, one of the hardest thunderstorms we ever have here. Towards sunset it began to rain and poured down in torrents for a short time, .8 of an inch falling by night. Then in the night there was shock of earthquake, so severe that it waked people from their sleep and some left their beds to see what was the matter. (T.S.R. 54. 2 P.M. 73. S.S. 62.)

Apr. 10. Sabbath. The forenoon was a little cloudy, and there were showers and a rainbow in the afternoon. We have attended meeting as usual. Mr. Pascoe preached a very good sermon from the text, "These words which I command thee shall be in thine heart, and thou shall teach them diligently unto thy children", &.c. Ida is today nineteen yrs. old. She is a little thinner than usual owing to her work in the Training school, which worried her so much that she lost ten pounds of flesh. I cannot get her exact measurement as she is away. She is as good and as confiding as ever - wishes to have no secrets from her mother - and is very loving and loveable. She expects to graduate in two months, and then to teach, and then -. She would not be willing everybody should know what next. May the dear Lord bless and keep her. (T.S.R. 55. 2 P.M. 73. S.S. 63.)

Apr. 11. Monday. When the mails come in and bring letters from all the dear absent ones, how happy am I. Such has been the case today, and all with that they are well. Luther arrived in Grantsville on the 6th inst. finds cattle very