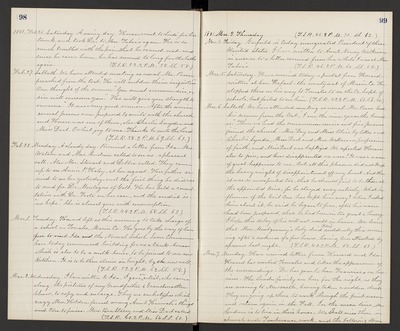 Feb. 27. Sabbath. We have attended meeting as usual. Mr. Pascoe preached from the text, "He will subdue, thine iniquities." One thought of the sermon - "You must overcome sin, or sin will overcome you." He will give you strength to overcome." It was a very good sermon. After the service several persons were proposed to unite with the church, and Horace was one of them, also Charlie Snyder and Miss Dart. O what joy to me. Thanks be unto the Lord. (T.S.R. 58. 2 P.M. 69. S.S. 61.)

Feb. 28. Monday. A cloudy day. Received a letter from Ida. Mrs. Watson and Mrs. Cudner called to see us - a pleasant call. Also Mr. Stewart and Debbie called. They came up to see Annie P. Haley, at her request. Her father arrived to see her yesterday, and the first thing he did was to send for Dr. Montague of Galt. He has held a consultation with Dr. Foote on her case, and the verdict is "no hope." She is almost gone with consumption. (T.S.R. 48. 2 P.M. 68. S.S. 63.)

Mar. 1. Tuesday. Howard left us this morning to take charge of a school in Tomales, Marin Co. He goes by the way of San Jose to visit Ida and the Normal School. Some Chinamen have today commenced building for us a tank-house which is also to be a milk-house, to be joined to our new kitchen. It is to be three stories in height, by the new well. (T.S.R. 52. 2 P.M. 62. S.S. 58.)

Mar. 2. Wednesday. I have written to Ida. I gave an artist, who came along, the pictures of my Grandfather & Grandmother Shaw, to copy and enlarge. They are ambrotypes which crazy Mrs. Holden found among Aunt Hannah's things and torn to pieces. Mrs. Ben Stacey and Miss Dart called. (T.S.R. 40. 2 P.M. 64. S.S. 60.)

Mar. 4. Friday. Garfield is today inaugurated President of these United States. I have written to Aunt Nancy Wilkinson in answer to a letter received from her while I was at Mrs. Tabor's. (T.S.R. 46. 2 P.M. 60. S.S. 58.)

Mar. 6. Sabbath. We have attended meeting as usual. Mr. Pascoe had his sermon from the text, "I am the vine, ye are the branches." Then we had the communion service and five persons joined the church - Mrs. Day and Miss Blois by letter and Charlie Synder, Miss Dart and Mrs. Wallace on profession of faith, and Miss Dart was baptized. We expected Horace also to join, and how disappointed we were! It was a season of great happiness to me, but all this pleasure did not keep the heavy weight of disappointment off my heart. And then it was so unexpected too, that he should fail to be there at the appointed time, for he stayed away entirely. What influence of the Evil One has kept him away? When I asked him about it, he said he began to fear, after his name had been proposed, that he had been in too great a hurry. I hope this delay of his will not result in harm. We learn that Mrs. Montgomery's baby (Edna) died suddenly this morning after a sickness of a few hours, having been attacked by spasms last night. (T.S.R. 40. 2 P.M. 63. S.S. 61.)

Mar. 7. Monday. Have received letters from Howard and Ida. Howard has reached Tomales and likes the appearance of the surroundings. Dr. has gone to San Francisco on business. The Lander family are here for the night, as they are moving to Newcastle, having taken a sudden start. They are going up there to work through the fruit season and return again in the Fall. In the mean time Mr. Cudner is to live in their house. We shall miss them in church and Temperance work, and the following offices