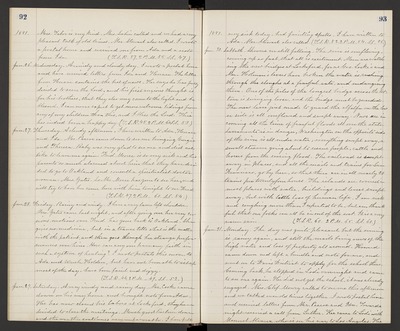 Jan. 26. Wednesday. A windy and cloudy day. I wrote a postal home and have received letters from Ida and Horace. The letter from Horace contains the best of news. He says he has fully decided to serve the Lord, and his first anxious thought is for his brothers, that they also may come to the light and be blessed. I can never expect to get more welcome tidings from any of my children than this, and I bless the Lord. This has indeed been a happy day. (T.S.R. 45. 2 P.M. 60. S.S. 53.)

Jan. 27. Thursday. A cloudy afternoon. I have written to Ada, Horace and Ida. Mr. Pascoe came down to see me bringing Georgie and Theresa. Body was very glad to see me and did not like to leave me again. Fred Morse is so very sick and his parents so much alarmed about him that they have decided to go to Oakland and consult a spiritualist doctor woman. Mrs. Yates. So Mr. Morse has gone to see her, and will try to have her come here with him tonight to see Fred. (T.S.R. 47. 2 P.M. 60. S.S. 54.)

Jan. 28. Friday. Rainy and windy. I have a very lame left shoulder. Mrs. Yates came last night, and after going over her very curious motions over Fred, has gone back to Oakland. She gives no medicine, but in a trance tells what is the matter with the patient and then goes through her strange performances over him. How can any one have any faith in such a system of healing? I wrote postals this morn. to Ada and Uncle Holden, but have not been able to sit up most the day- have been faint and dizzy. (T.S.R. 44. 2 P.M. 49. S.S. 52.)

Jan. 29. Saturday. A very windy and rainy day. Mr. Cooke came down on his way home and brought note from Ada. He has now closed his labors at Lockeford, they have decided to close the meetings. Much good has been done and the weather continues very unfavorable. I have felt

Jan. 30. Sabbath. Showers are still falling. The river is overflowing, coming up so fast, that all is excitement. Men are watching the new bridges at Lockeford, for as Geo. Locke's and Mr. Holman's levers have broken the water is rushing through the sloughs at a fearful rate, and endangering them. One of the piles of the longest bridge across the bottom is swinging loose, and the bridge must be guarded. The new lever just made to guard the alfalfa on the lower side is all overflowed and swept away. News are in coming all the time of fearful floods all over the state. Sacramento is in danger, Washington on the opposite side of the river is all under water, everything swept away, a small steamer going about to rescue people, cattle and horses from the roaring flood. The railroad is swept away in places, and all the mails and trains for San Francisco, go by here, so that there are in all nearly 20 trains per twentyfour hours. The islands are covered in most places with water, buildings and levers swept away, but with little loss of human life. I am sick and coughing more than I expected to be but am thankful that our folks can all be in out of the wet. It is a very warm rain. (T.S.R. 60. 2 P.M. 65. S.S. 60.)

Jan. 31. Monday. The day was quite pleasant but the evening is rainy again, and still the mails bring news of the high water and loss of property all around. Howard came down and left a bundle and note for me, and went on the Davis District to apply for the school there. Coming back, he stopped in Lodi overnight and came to see me again. He did not get the school, it was already engaged. Mrs. Clif. Mowry called to see me this afternoon and we talked over old times together. I wrote postal home and received letters from Mr. Pascoe and Ida. Towards night received a call from Luther. He came to Lodie with Manuel Alvarez who is on his way to Los Angeles. He