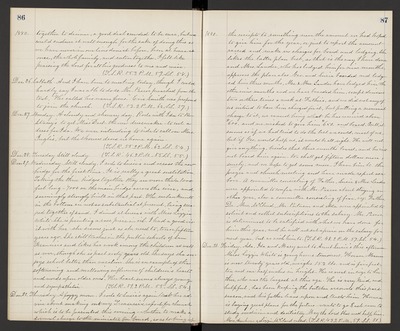 1880. together to dinner, a good deal crowded to be sure, but we could endure it well enough for the sake of doing this as we have never in our lives done it before, been at home at once, the whole family, and eaten together. I felt like praising the Lord for all his goodness to me and mine. (T.S.R. 55. 2 P.M. 59 S.S. 58.)

Dec. 29. Wednesday. Still cloudy. I rode to Susie's and across the new bridge for the first time. It is really a great institution. Taking the three bridges together they arre more than 1000 feet long - 700+ on the main bridge across the river, and seemingly strongly built in that part. The embankments in the bottom are not so substantial at present, being scraped together of sand. I dined at Susie's with Miss Lizzie White. She is painting a rose piece in oil. I had a good visit with her she seems just as she used to, ten or fifteen years ago. She still teaches in the public schools of San Francisco and likes her work among the children as well as ever, though she is past sixty years old. She says she enjoys school better than vacation. She is an example of the softenening and mellowing influence of children's hearts and words upon older ones. Her heart seems always young and sympathetic. (T.S.R. 51. 2 P.M. 55 S.S. 54.)

Dec. 30. Thursday. A foggy morn. I rode to Susie's again to ask her advise about making out my Treasurer's report for church which is to be presented this evening whether to make a formal change to the minister for board, so as to bring up

1880. the receipts to something near the amount we had hoped to give him for the year, or just to report the amount raised and make no charges for board and lodging. She likes the latter plan best, so that is the way I have done and Mrs. Lander, who has lodged him for nine months, approves the plan also. Geo. and Susie boarded and lodged him three months, Mr. & Mrs. Lander have lodged him the other nine months and we have boarded him, except dinners two or three times a week at Father's, and we did not any of us intend to have him charged for it, but putting a nominal charge to it, we cannot bring what he has received above $600. and we wished to give him $650. and board. Well, it seems as if we had tried to do the best we could, most of us, but if Geo. would help us, it would be all right. He will not give anything, besides that three months board, and he will not board him again. We shall get fifteen dollars more, surely, and we hope to get some more. I have been to the prayer and church meeting and have made report as above. A committee consisting of Father, Susie & Mrs. Lander were appointed to confer with Mr. Pascoe about staying another year, also a committee consisting of five, viz: Father, Dr. Mrs. McCloud, Mr. Putnam and Ada were appointed to solicit and called subscriptions to the salary. Mr. Pascoe is determined to be satisfied with what have done for him this year, and he will not set a price on the salary for next year, but we wish him to. (T.S.R. 48. 2 P.M. 57. S.S. 54.)

Dec. 31. Friday. Ada, Ida and Mary went to Aunt Susie's this afternoon. Miss Lizzie White is going home tomorrow. Horace Mann is now twenty years old, weight 152 lbs. and is five feet, ten and one-half inches in height. He is next in size to Luther, who was the largest at this age. He is very kind and helpful, has been keeping the butcher accounts this past season, and his father [?] upon and [?] him. Horace is laying great plans for the future - wants to go East soon to study medicine and dentistry. May the Lord bless and help him. Mrs. Ambrose & Lizzie McCloud called. (T.S.R. 43. 2 P.M. 59. S.S. 51.)