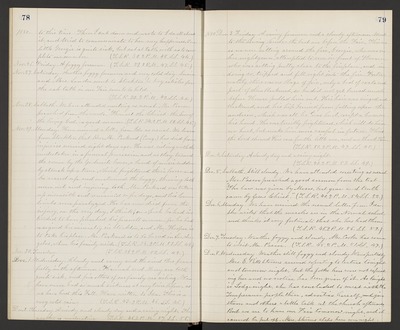 Nov. 29. Monday. Have received a letter from Ida as usual. We learn from Stockton that Rev. Mr. Packard (Cong.) has died from injuries received eight days ago. He was riding with the undertaker in a funeral procession and as they turned the corner by the Yo Semite house, a band of music suddenly struck up a tune, which frightened their horse and he reared up and overturned the buggy, throwing both men out and injuring both. Mr. Packard was taken up insensible and remained so for days, and his lower limbs were paralyzed. He has now died from the injury, on the very day, I think, on which he had intended to have preached his farewell sermon, for he had resigned his ministry in Stockton, and Mr. Hooper is to take his place. Mr. Packard is to be buried in Los Angelos, where his family reside. (T.S.R. 36. 2 P.M. 51. S.S. 48.)

Dec. 1. Wednesday. Cloudy and rainy and the wind blew fearfully in the afternoon. Hannah and Mary are both quite sick, and five others of our family are ailing. We have never had so much sickness so at anytime before, as we have had this Fall. Have written to Ida. This is a very cold rain. (T.S.R. 43. 2 P.M. 46. S.S. 46.)

1880. Dec. 3. Friday. A rainy forenoon and a cloudy afternoon. Went to the Sewing Circle - the last one before the Fair. This eve as we were sitting around the fire, Georgie, who was in his nightgown, attempted to run in front of Horace, who was sitting pretty close to the fireplace, and in doing so, tripped and fell right into the fire. Fortunately, there was no blaze of fire, only a bed of coals and part of them blackened, so he did not get burned much before Horace pulled him out. His hair was singled and blackened, and his hip bruised from falling upon the andiron, which was all he was hurt, except a burn on his hand. He was terribly frightened, which will do him no hurt, but make him more careful in future. Thus the Lord showed His care for the little one, and we thank Him. (T.S.R. 50. 2 P.M. 47. S.S. 45.)

Dec. 8. Wednesday. Weather still foggy and cloudy. Unexpectedly Mrs. E. Pitts Stevens arrived expecting to lecture tonight and tomorrow night, but the folks here were not expecting her and no notice has been given of it. As tonight is Lodge night, she has concluded to meet with the Temperance people there, advertise herself, and give them and others a little talk at the church afterwards. But we are to have our Fair tomorrow night, and it cannot be put off. Mrs. Stevens stops here overnight.