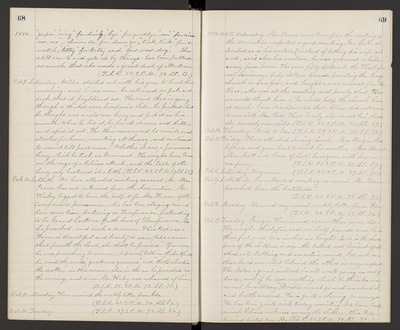 Oct. 9. Saturday. Willie started out with his gun to hunt this morning, and before noon he returned so pale and sick, that it frightened us. He said that in going through a thicket near Simpson's Lake, he picked what he thought was a wild rose berry and put it in his mouth. When he bit it, he found it sour and bitter and spit it out. He then commenced to vomit, and started for home, vomiting all the way, and continued to vomit till past noon. Whether it was poisonous berry which he took we know not. He might have been on the verge of a bilious attack, and taste of the berry only hastened it a little. (T.S.R. 43. 2 P.M. 67. S.S. 63.)

Oct. 10. Sabbath. We have attended meeting as usual. As Mr. Pascoe has not returned from the Association, Mr. Haley begged to have the pulpit for Mr. Finn - of the Campbellite persuasion, who has been staying round here sometime, lecturing on Temperance, pretending to be Grand Lecturer for the Sons of Tempereance. So he preached - and such a sermon. His text was - "Favor is deceitful and beauty is vain, but a woman that feareth the Lord, she shall be praised." Of course, he was preaching to women, but such talk in the pulpit he used the words "goodness gracious" and "that's what's the matter," in this sermon, also in the one he preached in the evening, and even Mr. Haley was ashamed of him. (T.S.R. 38. 2 P.M. 73. S.S. 71.)

1880. Oct. 13. Wednesday. Mr. Pascoe came home from the meeting of the Association - reported a good meeting. Geo. Locke attended, as is his custom (instead of letting his wife go) and, as is also his custom, he was generous while away from home. He gave fifty dollars to the Theological Seminary, forty dollars towards painting the Cong. church in San Jose, and bought a new overcoat for Mr. Ross, who was at the meeting and poorly clad. How we would thank him if he would help the church here as much. I am disappointed that Clara did not come down with Mr. Ross. How lonely she must be! And she scarcely ever writes. (T.S.R. 40. 2 P.M. 75. S.S. 69.)

Oct. 19. Tuesday. Georgie Hammond is now three years old. He weighs thirtyfive and one-half pounds and he is three feet and two inches in height. So he is the champion of the children in size - the tallest and heaviest of all. And as to talking and an active mind, I do not see that he is one whit behind the others in any respect. He takes a great interest in all work going on out of doors, and if he sees anything which he thinks unusual he will say, "Dordie must go and see about it", and bustle around. He is quite a stirring personage. He has been quite sick today vomiting. We have had much bilious sickness among the children this Fall. Received postal from Ida. (T.S.R. 42. 2 P.M. 78. S.S. 74.)