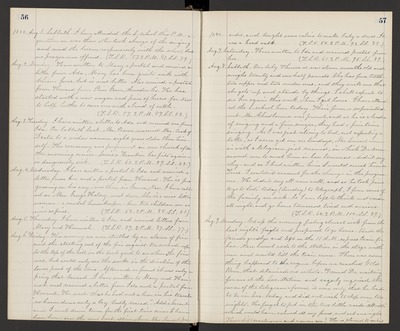 Aug. 2. Monday. Have written to Mary a postal and received a letter from Ada. Mary has been quite sick with bilious fever, but is now better. Also received a postal from Howard from Pine Grove, Amador Co. He has started with a new wagon and pair of horses for Nev. to help Luther to come over with a band of cattle. (T.S.R. 57. 2 P.M. 89. S.S. 82.)

Aug. 3. Tuesday. I have written a letter to Ada and received one from Ida. On Sabbath last, Mr. Pascoe married Mr. Cook of Dexter to a widow woman eight years older than himself. The ceremony was performed in our church after the morning service. Susie's Frankie has fits again - is dangerously sick. (T.S.R. 60. 2 P.M. 89. S.S. 83.)

Aug. 6. Friday. This morning we were startled by an alarm of fire and the starting out of the fire engines. We rushed up to the top of the hill in the back yard to see where the fire was, but could only see the smoke in the direction of the lower part of the town. Afterwards we found it was only a privy that burned. I have written to Mary and Hannah and received a letter from Ida and a postal from Howard. He wrote that he had met a bear in his travels "no harm done only a boy scared." Addie Smart and I went down town for the first time since I have been here - saw the new post-office, where Mr. Smart presides,

Aug. 8. Sabbath. Our baby Theresa is now eleven months old and weighs twenty and one-half pounds. She has five teeth - two upper and two under ones, and they write me that she gets up and stands by the things. I shall expect to see her again this week, when I get home. I have attended the S. school here today. Their former superintendent Mr. Chadbourne was present, and as he is a leader of singing and a fine singer, they had a fine time singing. As I was just retiring to bed, not expecting a letter, as I never get one on Sundays, Mr. Smart came in with a telegram, just received, in which Dr. summoned me to meet him Sac tomorrow - didn't say why - and as I had written him I would meet him on Tues. I couldn't account for the change in the programme. He didn't say all were well, and as he took pains to go to Lodi today (Sunday) to telegraph, I fear some of the family are sick. So I am left to think and wonder all night, and go home tomorrow, tired and anxious. (T.S.R. 64. 2 P.M. 100. S.S. 89.)

Aug. 9. Monday. Got up this morning feeling almost sick from the last night's fright and prepared to go home. Bade the friends goodbye and left on the 11 A.M. express train for Sac. Mrs. Smart rode to the station in the stage with me and waited till the train came. There was something happened to the engine before we reached Gold Run, that detained us awhile. Found Dr. waiting for me at the Sac. Station and eagerly inquired the cause of the telegram - found it was only that he had to be in Sac. today and did not wish to stop over two nights. He forgot to put in the two little words- "all well," which would have calmed all my fears, and set me right. How different men and women are! He is pleased to see how