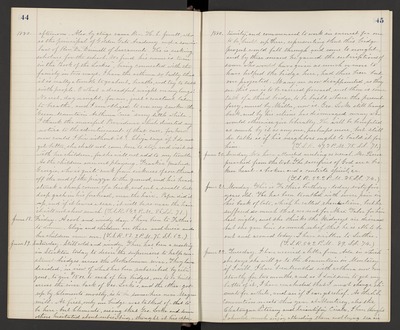 1880. afternoon. Also by stage came Rev. H. E. Jewett, who is the principal of Golden Gate Academy and a son-in-law of Rev. Dr. Dwinell of Sacramento. He is seeking scholars for the school. We find his name is twice in the "Book of the Lockes", being connected with the family in two ways. I have the asthma so badly that it is really a trouble to go about breathe, and try to talk with people. O what a dreadful weight on my lungs! No rest, day or night, for me, just a constant labor to breathe, and I am obliged to use my smoke - the "Green Mountain Asthma Cure" every little while. I thank the merciful Providence which directed my notice to the advertisement of that cure, for how now could I live without it? Eliza says if I do not get better, she shall not come here to stop and visit us with her children, for she will not add to my trouble. As the children were out playing. Frankie pushed Georgie, who is quite weak from sickness of sorethroat off the end of the piazza to the ground, and his head struck a sharp corner of a brick, and cut a small but deep gash in his forehead, near the hair. Papa did it up, and if it leaves a scar, it will be so near that hair it will not show much. (T.S.R. 54. 2 P.M. 86. S.S. 71.)

June 19. Saturday. Still cold and windy. There has been a meeting in Stockton today to desire the supervisors to help construct bridges across the Mokelumm river. They have decided, in view of what has been subscribed by citizens, to give $1500. to each two bridges, one to be built across the river back of Geo. Locke's and the other - got up by Clements mostly, is to be somewhere near [?] mill. At first, only one bridge was talked of that to be here - but Clements, seeing that Geo. Locke and some others hesitated about subscribing, thought it his opportunity,

1880. and commenced to work in earnest for one to be built up there, representing that this bridge project would fall through and come to nought, and by these means he gained the subscriptions of some who would have given as much or more to have helped the bridge here, had there been but one projected. Many are now disappointed, as they see this one is to be carried forward, and there is some talk of a third bridge, to be built where the present ferry, owned by Meiller, now is. Geo. Locke still hangs back, and by his actions has discouraged many who would otherwise give liberally. He will be benefited as much by it as any one, perhaps more, but still he talks as if his neighbors ought to build it for him. (T.S.R. 47. 2 P.M. 75. S.S. 71.)

June 21. Monday. This is Father's birthday - today sixty five years old. He has been troubled with severe pain in his back of late, which he called rheumatism, but he suffered so much that we sent for Mrs. Tabor for him last night, and she thinks the kidneys are diseased but she gave him so much relief that he is able to be out and around today. I have written to Luther. (T.S.R. 54. 2 P.M. 89. S.S. 74.)

June 22. Tuesday. I have received a letter from Ada in which she says shell will go to the Convention in Monterey if I will. I have been troubled with asthma now constantly for two months, and as I don't seem to get any better of it, I have concluded that I must change climate for awhile, and see if I can get relief. As the S.S. Convention meets this year at Monterey, also the Chatauqua Literacy and Scientific Circle, I have thought I should much enjoy attending them and trying sea air