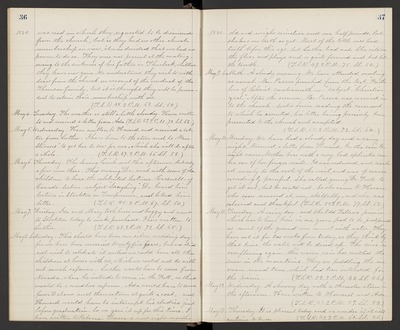 1880. was read in which they requested to be dismissed from the church, but as they had no other church membership in view, it was decided that we had no power to do so. They were not present at the meeting, owing to the sickness of his father in Thurlock, whether they have now gone. We understand they wish to withdraw from the church on account of the conduct of the Thomson family, but it is thought they will be persuaded to retain their membership with us. (T.S.R. 48. 2 P.M. 68. S.S. 60.)

May 6. Thursday. The Sewing Circle met this afternoon, but only a few were there. This evening, Dr. went with some of the children to hear the celebrated lecturer - Carswell of Canada - lecture - subject "Laughing". Dr. heard him lecture in Stockton on Temperance, and liked him better. (T.S.R. 45. 2 P.M. 67. S.S. 60.)

May 8. Saturday. This should have been our silver wedding day for we have been married twenty five years, but we did not wish to celebrate it unless we could have all the children at home with us, which we could not do with out much expense. Luther would have to come from Nevada, when he intends to come in the Fall, so that would be a needless expense, Ada would have to come from Delano and then return at quite a cost, and Howard would have to interrupt his studies just before graduation. So we gave it up for this time. I have written to Rebecca. Theresa is now eight months

May 9. Sabbath. A cloudy morning. We have attended meeting as usual. Mr. Pascoe preached from the text, "For the love of Christ constraineth us." subject "Christian Zeal." After the sermon, Mr. Pascoe was received into the church. Sister Susie reading the covenant to which he assented, his letter having previously been presented to the church and accepted. (T.S.R. 55. 2 P.M. 72. S.S. 64.)

May 10. Monday. We have had a cloudy day and a rainy night. Received a letter from Howard. On the rain tonight came Mother here with a very bad splinter under one of her finger nails. It was redwood, and reached nearly to the roots of the nail, and was of course exceedingly painful. She called young Dr. Foote to get it out, but he could not. So she came to Horace who soon removed it, very skillfully, and she was relieved and thankful. (T.S.R. 55. 2 P.M. 77. S.S. 63.)

May 11. Tuesday. A rainy day and the Odd Fellows' picnic which was to have been in our grove, had to be postponed as most of the ground was covered with water. They have set it for two weeks from today, as they think by that time the water will be dried up. The river is overflowing again this warm rain has melted the snow in the mountains. They are peddling the ice cream round town, which had been intended for the picnic. (T.S.R. 52. 2 P.M. 48. S.S. 46.)