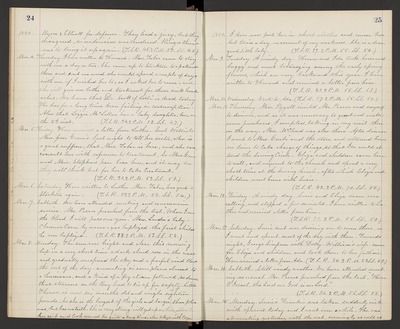 Mar. 4. Thursday. I have written to Howard. Mrs. Tabor came to stay with me a day or two. She came up to Stockton to a patient there and sent me word she would spend a couple of days with me, if I wished her to, so I asked her to come, and she will give me baths and treatment for these sick headaches. We learn that Dr. Scott of Lodi is dead today. He has for a long time been failing in consumption. Also that Lizzie McLellan has a baby daughter, born on the 2d inst. (T.S.R. 34. 2 P.M 52. S.S. 47.)

Mar. 5. Friday. Have received a letter from Luther. Sent Willie to Mrs. Jesse Green's last night to tell her sister, who is a great sufferer, that Mrs. Tabor is here, and she can consult her with reference to treatment. So Mrs. Green and Mrs. Stephens have been here, and it may be they will think best for her to take treatment. (T.S.R. 31. 2 P.M. 52. S.S. 51.)

Mar. 8. Monday. The sun rose bright and clear this morning but in a very short time a dark cloud rose in the west and gradually overspread the sky and a fearful wind blew the rest of the day - amounting in some places almost to a hurricane, and a kind of a fog storm followed, so dense that steamers on the Bay had to tie up for safety. Little Theresa is now six months old and weighs eighteen pounds. So she is the largest of the girls and larger than John was, but has no teeth. She is very strong-will get up on her elbow in her crib and look around for girls a long time, also plays with toys.

Mar. 9 Tuesday. A windy day. Horace and Ida took horse and buggy and went botanizing among the early spring flowers, which are very backward this year. I have written to Howard and received a letter from him. (T.S.R. 41. 2 P.M. 65. S.S. 61.)

Mar. 11. Thursday. Mrs. Pygall invited Mr. Pascoe and myself to dinner, and as it was necessary to go out and make some purchases, I accepted, taking in my visit there on the way. Mrs. McCloud was also there. After dinner I went to Mrs. Gruls' and the store and returned home in time to take charge of things, so that Ida could attend the Sewing Circle. Eliza and children came here to call, and we went to the church and spent a very short time at the Sewing Circle, after which Eliza and children went home with Susie. (T.S.R. 42. 2 P.M. 70. S.S. 58.)

Mar. 15. Monday. Susie's Frankie was taken suddenly sick with spasms today, and I went over awhile. He was at meeting yesterday with the rest, seemingly as well as