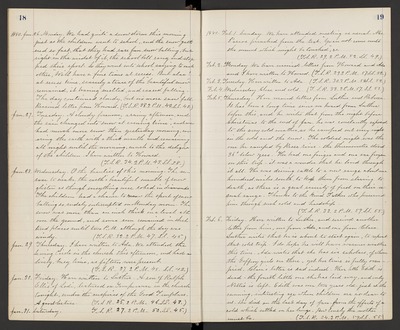 1880. Jan. 26. Monday. We had quite a snow storm this morning just as the children went to school, and the snow gathered so fast that they had rare fun snow balling, but right in the midst of it the school bell rang and stopped their sport. So they went into school saying to each other, "We'll have a fine time at recess." But alas! at recess time, scarcely a trace of the "beautiful snow" remained, it having melted, and ceased falling. The day continued cloudy, but no more snow fell. Received letter from Howard. (T.S.R. 38. 2 P.M. 42. S.S. 40.)

Jan. 27. Tuesday. A cloudy forenoon, a rainy afternoon, and the rain changed into snow "at evening time", and we had much more snow than yesterday morning, covering the earth with a thick mantle and remaining all night until the morning, much to the delight of the children. I have written to Howard. (T.S.R. 34. 2 P.M. 43. S.S. 38.)

Jan. 28. Wednesday. O the beauties of this morning. The sun rose to make the earth's beautiful mantle of snow glisten as though everything were robed in diamonds. The children had a chance to resume the sport of snow balling so rudely interrupted on Monday morn. The snow was more than an inch thick on a level all over the ground, and some even remained in sheltered places until two P.M. although the day was windy. (T.S.R. 32. 2 P.M. 47. S.S. 45.)

Feb. 5. Thursday. Have received letters from Luther and Rebecca. It has been a long time since we heard from Luther before this, and he writes that from the night before Christmas to the end of Jan. he was constantly exposed to the very cold weather, as he camped out every night in the cold and the snow. The coldest night was the one he camped by Reese river - the thermometer stood 36- below zero. He had one finger and one was frozen on this trip - it was a wonder that he lived through it all. He was driving cattle to a new range about one hundred miles south, to keep them from starving to death, as there is a great scarcity of feed on their usual range. Thanks to the kind Father who preserved him through such cold and hardship. (T.S.R. 33. 2 P.M. 59. S.S. 55.)

Feb. 6. Friday. Have written to Luther, and received another letter from him, one from Ada, and one from Clara. Luther writes that he is about to start again, to repeat that cold trip. I do hope he will have warmer weather this time. Ada writes that she has six scholars, of whom the Geffroy girls are three, yet her time is fully occupied. Clara's letter is sad indeed. Her little Edith is dead - the fourth little one she has laid away, and only Nettie is left. Edith was over two years old - just as the cunning, interesting age when children are so dear to us. She died on the last day of Jan. from the effects of a cold which settled on her lungs. How lonely the mother must be. (T.S.R. 34. 2 P.M. 59. S.S. 55.)